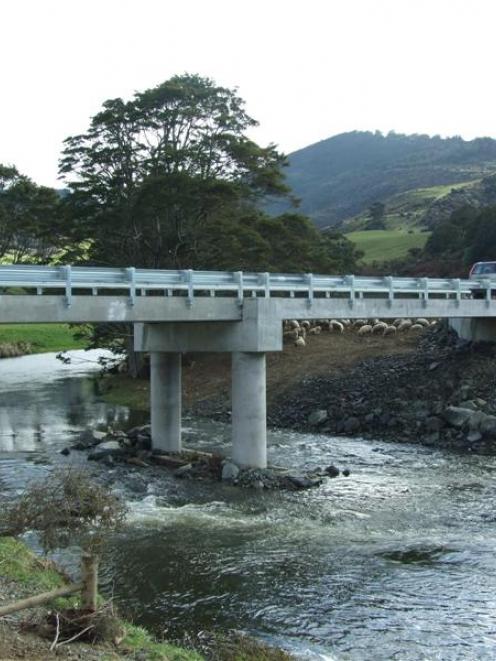 Alan Pullar said he and other residents used the bridge until it collapsed one night about 18 months ago.

"It was a bit difficult to get from one farm to the other. Some farmers had to drive stock through the river and that is not an easy job."

It had been closed since November 2009 when inspections revealed serious damage, thought to have been caused by an overloaded vehicle.

Mr Pullar's late father, Bruce Pullar, built a ford on the property to create a way across for those who needed to cross that part of the river.

Clinton Primary School deputy principal Russell Fleming lives in Tawanui and had to cross the river every day to get to work.

"I ended up having to drive through the river, using the ford, to get to work.

"The other way was to go through Owaka, but that doubled my travel time."

Mr Fleming was glad he had kept his 4WD vehicle, otherwise, using the ford would have been impossible.

The council secured funding from the New Zealand Transport Agency (NZTA) and awarded a contract for construction to South Roads last December. The council had done a great job getting the bridge project completed despite a long wait for funding, he said.

"Without the bridge, living here would be impossible.

"There are a few properties cut in half by the river and many people rely on the Tawanui bridge to cross it every day."

The closed bridge had caused frustration for some tourists who wanted to cross the river to get to a walk a few kilometres from the bridge, but had to either wade through the river or go right around and come from the opposite side.

Former Catlins ward councillor Kevin Thompson said getting funding had been "a bit of a battle" but he was glad a new bridge was in place.

Clutha District Council district assets manager Jules Witt said that while there had been a long process to go through to get to this point, the end result was an excellent asset for the local community who relied on that river crossing.

A few minor works such as sealing the bridge approaches were still to be completed, Mr Witt said.