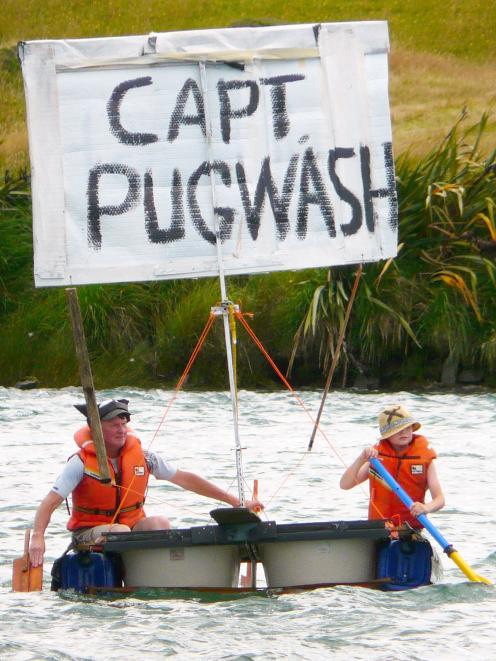 Ahoy there! Bill Kearon and son Patrick (then 8), of Balclutha, compete in last year’s Big River Raft Race on the Clutha River in Balclutha. The race takes place again tomorrow. PHOTO: RICHARD DAVISON
Organisers are hoping for a late influx of entries to boost a special South Otago armada tomorrow.

Irrespective of the numbers plying their way from Beggs Beach, near Clydevale, down the Clutha to the Balclutha bridge, she said fun was assured, thanks to the event’s accompanying riverside festival, which would run from 9.30am to 1pm.

The long-standing tradition of bombarding the flotilla from the bridge with non-harmful missiles, such as eggs, flour and water balloons, was also encouraged.

"We’ve got food and other vendors on the riverbank, a waterslide from the local fire brigade, and numerous other kids’ and family entertainments to keep everyone amused, so we’re looking forward to a great community day out."

Although recent flooding had raised concerns over race safety, those had been laid to rest as the river subsided in recent days.

"We’ve been checking in with Otago Regional Council, and there are no concerns relating to flooding. We’ve already got comprehensive health and safety rules in place for the event, so we’re expecting to go ahead as planned."

The event — which was founded in 1971 — was reincarnated by community group Project Clutha in 2017, following a hiatus of five years.

"We want to keep this fantastic Clutha tradition alive and enhance our river. Sunshine’s predicted, so we hope people will come and join the fun."