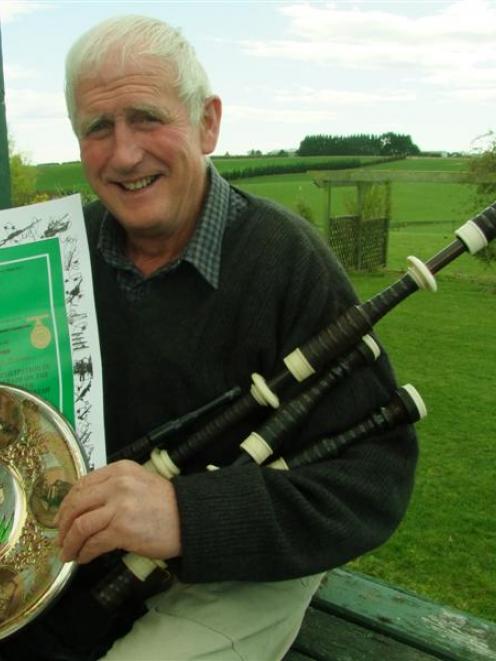 Hillend farmer and pipe band piper Don Wilson back on the farm after a 10-day trip to Libya, paid for by leader Muammar Gaddafi. Photo by Glenn Conway.
Hillend farmer Don Wilson is relatively relaxed for someone who unwittingly became a pawn in an international political controversy.

The veteran piper, with about 50 years' experience, is one of about 60 pipers and drummers from around the country who recently returned from a 10-day trip to Libya, North Africa, largely paid for by that country's leader, Colonel Muammar Gaddafi, who was holding celebrations marking 40 years in power.

Libya, at the same time, was the focus of world media attention after Scotland returned Lockerbie bomber Abdelbaset Ali Mohmed al-Megrahi to his homeland on compassionate grounds.

The sounds of Scottish music whirling through the air at Col Gadaafi's celebrations appeared to rub salt into the wounds of many families still grieving over the 1988 bombing of an American plane over the Scottish village, killing 259 passengers and crew and 11 Lockerbie residents on the ground.

For Mr Wilson (61), the recent controversy was an unfortunate coincidence and one he and the other band members believed had been blown out of proportion.

The band performed in a military tattoo during Col Gaddafi's festivities in the Libyan capital of Triploi although, at the time, they had no idea they were being flown there to play for the dictator, who they never met.

A Russian promotional group, which arranges for pipe bands around the world to play at similar events, organised the trip but did not mention Col Gaddafi would be present for any of its performances.

"We're just a group of like-minded people who enjoy playing together. We knew it [Libya] was a dictatorship and Gaddafi country, but had no idea we would be playing for him," Mr Wilson said.

Band members were made aware of the controversy while abroad but said they were there just to play.

Mr Wilson, who arrived home on Monday, said it was a shame some media had "made a lot out of it" when the band was only there to perform.

Planning for the trip started more than a year ago and no-one could have predicted the Lockerbie bomber would be released and sent back to Libya at the same time the band was in that country, he said.

Mr Wilson, who was a pipe major in the City of Dunedin pipe band for 21 years and a long-serving member of the Balclutha Pipe Band, said the trip was a rare opportunity.

The polite people, constant 40degC days and swimming in the Mediterranean Sea were all memories he would treasure.

The band hopes to avoid political trouble next year when it attends a military tattoo in Italy.