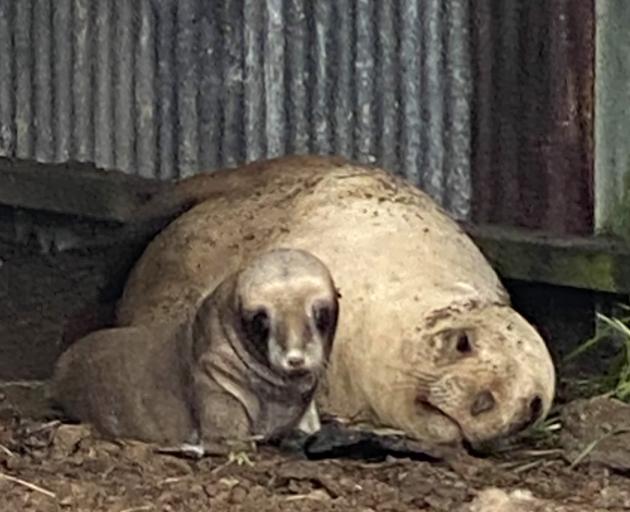 The Department of Conservation (Doc) is appealing for information following the death of 8-year-old Matariki and her 1-month-old pup on Wednesday.

At the time of the accident, Matariki was probably taking her pup to a new spot to rest and might have been nursing the pup on the road.

They were found badly injured by a passing motorist who rang the Doc emergency line at 11.24pm.

Matariki was euthanised by a vet on Thursday and the pup has since died because of her severe injuries.

"Matariki was gifted her name by local whana," he said.

"Our whanau are saddened by our loss of Matariki and her pup."

Dairy farmer Case Malone, of Inch Clutha, came across Matariki on his property on January 13.

He said his cows were standing in the corner of a paddock, which struck him as odd.

"I went to investigate and I saw a big sea lion with a tag.

"I thought she might have been hurt but when she moved I saw a wee pup.

"It was a unique experience for it to happen in our hay barn.’’

Mr Malone last saw the sea lions about 10 days ago and was heartbroken to learn of the deaths.

"I got a call the other night to let me know they’d been hit — it’s not the fairy-tale end to the story I thought.

"I expected she’d have more pups and keep breeding."

He said he hoped the person who was driving the car would come forward.

Mr McCarroll said speaking with the driver would help Doc to understand more about what had happened and identify ways to protect sea lions from similar incidents.

"We understand accidents happen, but it’s important people inform Doc if they do hit native wildlife.

"All New Zealand sea lions are named, tagged and well-known within their community."

The New Zealand sea lion is classified as "nationally vulnerable".

Ninety-eight percent of breeding occurs on Campbell and the Auckland Islands, but there are also small populations on the lower South Island and Stewart Island.

"Rapoka [sea lions] are local personalities within the wider community and this tragic loss will be felt by us all.

"We are hoping Matariki’s first born, Jade, will have a pup of her own this year and it will be up to her to carry on Matariki’s whakapapa."