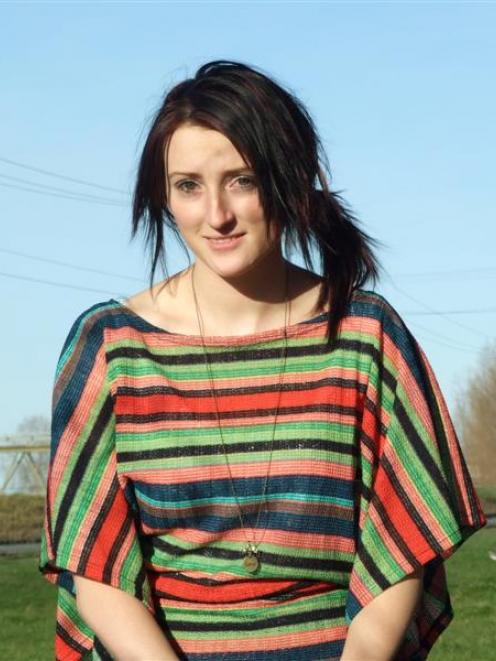 South Otago musician Vickie Evans is enjoying being back in her home town, Kaitangata. Photo by Helena de Reus.
Winning the top prize in the 2011 Gold Guitar Awards in Gore has led to a busy year for country singer-songwriter Vickie Evans. Balclutha reporter Helena de Reus catches up with the Kaitangata star.

One year on and Vickie Evans' star is still on the rise.

The South Otago songstress came to national attention when she was named overall winner of the New Zealand Gold Guitar Awards last June with her original song Lipstick Stains.

Evans (24) won the senior gospel and the New Zealand composition categories, and teamed up with Cameron Scott, of Cave, to win the duet. 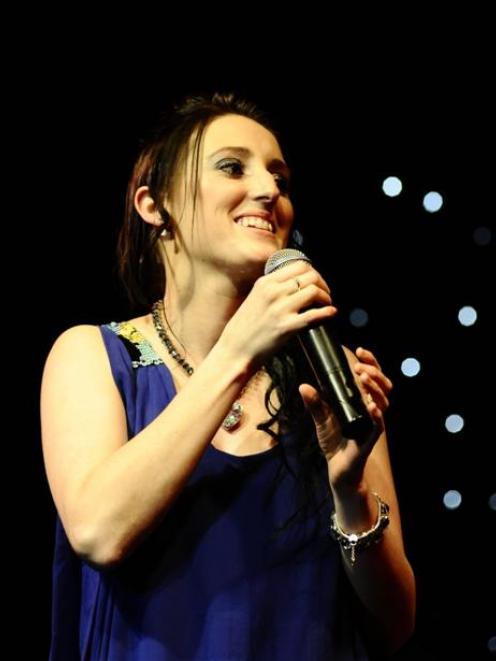 Vickie Evans sings her way to victory in the 2011 Gold Guitar Awards in Gore. Photo by Gregor Richardsom.
She has been singing country music since she was 11, when a singing teacher entered some local school children, including Evans, in a Kaitangata talent quest.

"As soon as I won the Gold Guitars, the doors opened up. It's just been awesome. I think winning the Horizon Award has done even more, especially with the trip to Nashville."

After performing at the National Country Music Awards in Hamilton last August, Evans won the Horizon Award and with it the right to represent New Zealand in the Telstra Road to Tamworth event in Australia in January, and then attend the Country Music Association of America's festival in June.

In June, while country music enthusiasts were preparing for the 2012 Gold Guitars Awards in Gore, Evans was travelling around the United States.

She performed at the Global Artists Party, part of the 2012 CMA Music Festival in Nashville, Tennessee - the largest country music festival in the world.

There she sang four original songs, including Lipstick Stains.

"It was pretty unreal playing for that many people - and there were some pretty important people there."

After the show, Evans was introduced to some country music greats, including Dolly Parton and Taylor Swift, which was "awesome".

Another highlight of the trip was meeting a man who had been Johnny Cash's guitar player for about 30 years.

Evans also spent a week and a-half on Norfolk Island competing in the Trans-Tasman Entertainer of the Year contest as part of the Norfolk Island Country Music Festival. Lipstick Stains won best original song and she was awarded the Encouragement Award.

"It was a good boost before going to Nashville."

Now back home in South Otago, Evans is looking forward to playing in the "Operation Owen" charity concert, to raise money for a new house for a Kaitangata family. Jodie and Terry Owen, of Kaitangata, have two daughters, Charli (7) and Meg (3), who have undiagnosed cerebella ataxia, a condition which affects the girls' co-ordination and balance, and makes them tire easily.

Friends Derek and Kylie Craig, of Cromwell, are organising a charity project to give the Owens a purpose-built home. To help raise money to build the house, a concert and auction will be held at the Balclutha War Memorial Hall on September 1.

Evans will feature in the show with fellow Kaitangata musician Aaron Jury, and their band the Crescents.

"I've known Terry and Jodie for years, since I was little. It will be great to do something for them, and something for my home town."

In between work, and preparing for the concert, Evans hopes to get stuck in writing songs.

"I'm co-writing with a friend from Cave, but I'm also writing on my own just trying to get some new material together."

Evans released her debut album Lipstick Stains this May and it topped the iTunes country music charts for three days straight.

She also hoped to produce a new single or music video, as well as performing at ticketed shows.

But South Otago can expect to see their golden country girl stay in the area for a while longer.

"Kaitangata's my home town - I just love South Otago. I'm a bit of a home girl - I love knowing everyone and after travelling overseas I appreciate home even more."