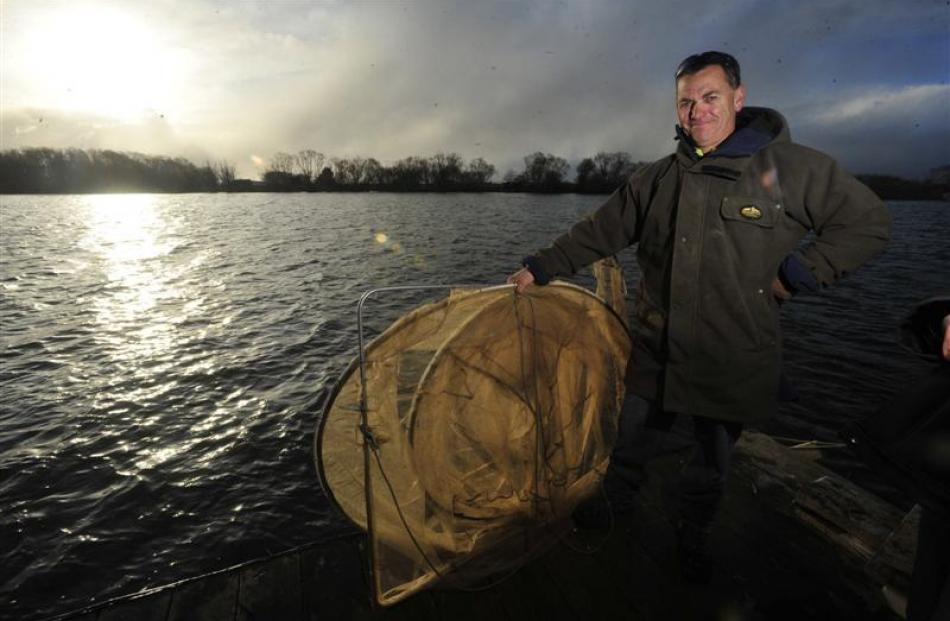 Kaitangata whitebaiter Robbie Owen: "Once you get a spot, you keep it." Photo by Craig Baxter.

If you drive through Kaitangata and towards Summer Hill, you will find the Clutha River dotted with many different kinds of floating structures. Further down the gravel road you drive down a muddy track, passing cows and the odd farm building, before having to abandon the car to continue on foot.

Here on the Matau branch of the Clutha River, is a section favoured by many whitebaiters, only a few kilometres upstream of the river mouth.

Robbie Owen, of Kaitangata, has been whitebaiting on the river for more than 25 years.

He and his wife Sue have a pontoon on the river and try to get out whitebaiting in weekends and after work during the week.

Mr Owen first got the pontoon and his spot on the river from Sue's uncle when he was 17, and has been going out whitebaiting there ever since.

"Once you get a spot, you keep it. We've got a good spot here with the pontoon and on a good year we can sometimes get about 40 pounds [18kg]."

His son Brad goes whitebaiting too, and on a sunny day with the radio playing in the background and a beer, it could not be much better, Mr Owen said.

Unfortunately when I visit the stand, the weather is poor, the wind is bitter, and the whitebait have gone elsewhere.

But that comes with the territory, and makes it clear why whitebaiters have huts.

Four years ago was the best season they had seen, he said.

"Whitebaiting has its good and bad seasons so you just take it as it comes."

And the best way to eat whitebait? In fritters.

Department of Conservation (Doc) freshwater ranger Pete Ravenscroft said the Clutha River was the "No 1" fishery in Otago, but history suggested the river had been an even more impressive fishery in the past.

Increasing the numbers of whitebait - particularly inanga - in rivers was important to protect the native fish and the whitebaiting pastime.

Doc staff had been working with landowners and councils to build up populations in many New Zealand rivers, including the Clutha, with a particular focus on spawning habitat.

The eggs of inanga - tiny native fish which make up most of the whitebait catch - are laid above the normal water level on the moist, grassy banks of rivers and streams. They tended to favour tributaries of larger rivers, such as the Kaitangata Stream.

In March, about 35 farmers attended a field day at Inch Clutha, near Balclutha, to see how fencing protects these habitats. The field day also looked at environmentally beneficial farm practices farmer Dean Gilbert has put in place. They include cambered lane-ways to keep waste from running into drains, yard water diversion and effluent management.

Otago Regional Council land resources officer Alice Webster said inanga needed grassy edges on which to spawn, so where there was no permanent fence, a simple electrified "hot-wire" kept out stock, protecting the eggs from being trampled or eaten by stock. This also helped improve water quality.

Mr Ravenscroft said inanga numbers would increase if people retained or re-established overhanging vegetation along the upper reaches of rivers to give shade and protection; and if downstream riverbanks were undisturbed during spawning time, from January to March. Unlike other fish, whitebait species lay their eggs among vegetation on stream banks during spring tides, leaving them to develop out of water.

The eggs, laid during the high spring tides from January through to May, take a month to hatch before washing out to sea. March is generally the peak time for inanga to spawn on the Clutha River.

Doc was seeking whitebaiters willing to work with the department to help track changes in whitebait population.

University of Canterbury research has found that tens of millions of whitebait eggs die from exposure to sunlight.

Researchers from the Marine Ecology Research Group of the university have studied the effects of UVB radiation on whitebait eggs. Whitebait lay their eggs almost exclusively under riverbank vegetation in tidal areas. Changes to this vegetation greatly affect whitebait breeding grounds.

The researchers showed that reduction in vegetation height and shading led to increased exposure to UVB radiation, greatly reducing egg survival and eventual production of whitebait.

Tips to help whitebait thrive:
• Fence off riverbanks and the edges of streams from stock
• Keep waterways clean
• Retain or re-plant overhanging vegetation
• Stick to fishing hours - 5am to 8pm
• Only one net per person
• Fishers must stay within 10m of net at all times
• Season August 15-November 30