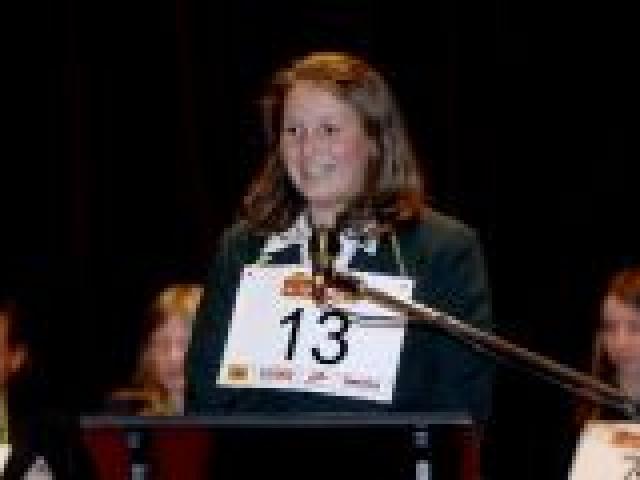 Kristen McKenzie, of Aparima college, Riverton competes in the Dunedin round of the national spelling bee. Photo by Linda Robertson.
Tapanui school pupil Whina Pomana did not flinch when she faced the guillotine last night.

Whina, of Blue Mountain College, was among 24 year-9 pupils from schools throughout Otago and Southland competing for a trip to Wellington in the Dunedin round of the New Zealand Vegemite Spelling Bee at Otago Boys High School.

After all but one of the other contestants had been knocked out, Whina and her closest rival, Edward Pleasance, of James Hargest College, Invercargill, fought out a tense eight round elimination final to determine the overall Dunedin winner.

That was when Edward, the secondplace-getter, made a small slip with the spelling of ‘‘etiquette'', and Whina, the winner, fronted up to ‘‘guillotine'', and spelt it correctly.

Contest organisers said that Whina had been regarded by schoolmates as ‘‘the class dictionary'', but some persuasion by her family and a teacher had been needed before she entered the event this year.

Spelling bee organiser Janet Lucas, of Wellington, said the top two pupils in the Dunedin event won air tickets to compete in the 12-contestant national finals in Wellington on March 22.

The New Zealand winner will receive an expenses-paid trip to the 81st Scribbs National Spelling Bee in Washington DC in May.