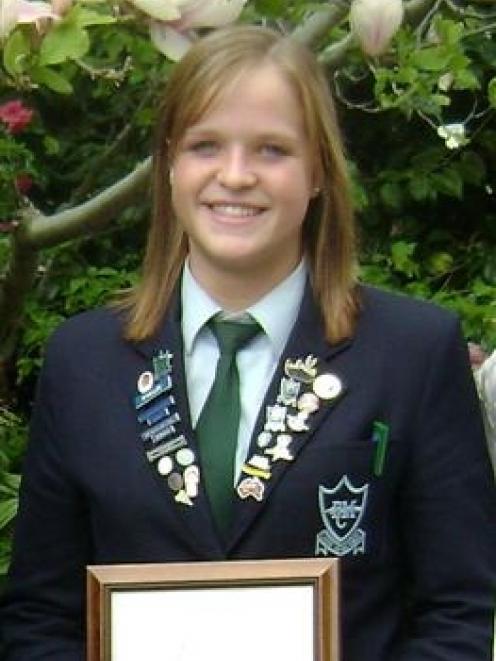 Youth community spirit award-winner Farryn Crawford. Photo Supplied.
An organisation that has taken on the hefty challenge of preserving a major wetland was last night named the premier Clutha volunteer group of 2009.

The Lake Waihola-Waipori Wetlands Society won the supreme award at the TrustPower Clutha Community Awards, and its members took home $1500 and a trophy.

Judges and award organisers praised the group for putting many hours into managing and enhancing the wetlands.

"They have a long way to go, but their initial activities are certainly having a positive impact."

It was a brilliant project for the district, he said.

"The Waihola lake and wetland is the largest tidal freshwater body in the southern hemisphere, so this factor makes it a special and unique place."

Mr Hayes said he was impressed with the calibre of all 35 nominations in the running for various prizes: "It really brings to the forefront how much people are doing for the district for free, making the district we live in a friendlier . . . better place".

A high-achieving West Otago pupil won the inaugural TrustPower youth community spirit award for her efforts in a wide range of pursuits.

Blue Mountain College pupil Farryn Crawford (17) was recognised for her service to the school and community as well as the wide range of projects she tackles in both arenas.

The group meets to ensure the Commissioner for Children is kept in touch with views held by young people.

Farryn was also elected last year for a two-year term on the Clutha District Youth Council, and now serves as its deputy chairwoman.

The other finalists were Tokomairiro High School pupil Libby Grant, and Nicole Ross from The Catlins Area School.

Four individuals received special civic awards for their efforts in the district over many years.