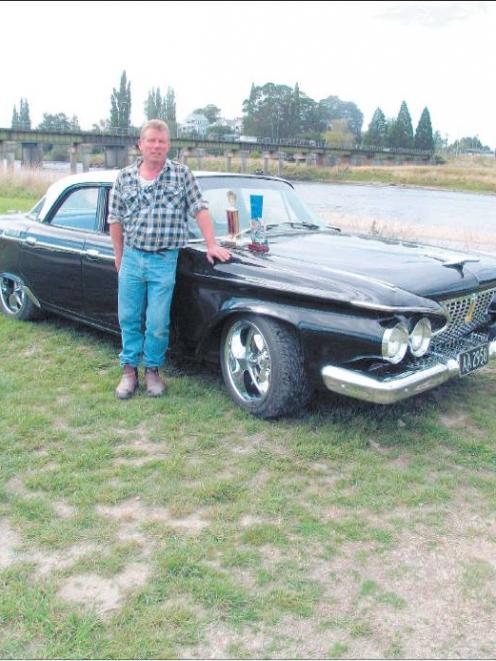 Pride and joy: Michael Hood stands beside his late father ’ s 1961 P lymouth B elvedere , which recently won the ‘‘People’ s Choice Top Car ’’ title at the Great USA Day in Dunedin.
A 1961 Plymouth Belvedere that was bought new by the late Mitty Hood in December 1961 has been lovingly restored by his son, Michael, and recently won the top honours at the Great USA Day American car rally in Dunedin.

‘‘To a lotof Gore people, this car is quite an icon, bringing back memories with a long history of being driven around this town,'' Mr Hood said.

He said when his father died in January 2005, it gave him the inspiration to fully restore the Plymouth.

‘‘On December 28, 2005, the Plymouth was back on the road, with a new bare-metal panel and paint job, new brakes and a new exhaust system.

‘‘I left the motor to be done by Tony [Parish], the wiring to Trevor [Hayward] and the upholstery to Hemi, of Arrow Upholstery,'' Mr Hood said.

He said all of the chrome work was carried out in Auckland, with even the new Boyd Caddington mags getting a dip.

‘‘Trevor fitted the stereo and I fabricated a large boom box for the boot, not to outdo the young ones, but to aid the older ones with hearing defects,'' he said.

Mr Hood said the Plymouth had been totally refurbished.

‘‘A lot of people just import a car from America and stick a new set of wheels on it, but we totally refurbished this from the ground up.''

He said that with the car looking like new again, he and his friends ventured off to the Great USA Day in Dunedin in 2006.

He said this year, to his surprise, they won the top prize, the People's Choice Top Car.

‘‘My Dad [Mitty] would have been extremely proud,'' he said.