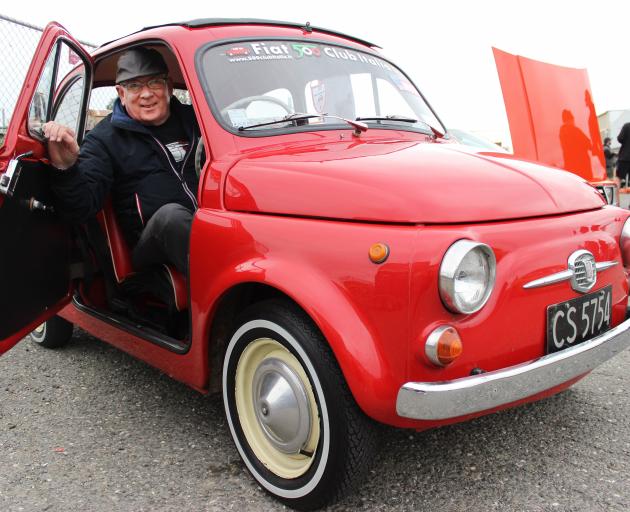 Pete Burtonwood, of Owaka, displays his restored 1964 Fiat Bambina 500D at the Hardpark Takeover car show in Invercargill on Saturday. PHOTO: KAREN PASCO
It was a car originally bought for his daughter to learn how to drive.

But since retiree Pete Burtonwood, of Owaka, has restored the 1964 Fiat Bambina 500D, he now spends his retirement taking his pride and joy to car shows.

Hundreds of hours and thousands of dollars had gone into the restoration of the vehicle since its purchase in 1997.

When asked why they originally selected the Fiat, he said subconsciously it might have had to do with his father.

Mr Burtonwood’s father was a firefighter but would use his days off in the early to mid-1960s to transport Fiats to new owners in New Plymouth.

"He would have been driving exactly this model."

The car, which was actually called a Cinquecento in Italy where it was manufactured, was bought the same year his father died. It was 499.5cc, weighed 500kg and came complete with "suicide doors", he said.

The doors were so-called "because if you’re an idiot and open them while you’re moving it’s catastrophic".

Mr Burtonwood took his car to the Hardpark Takeover 2021, a car show held in Invercargill on Saturday which featured more than 109 vehicles from the Bambina through to muscle cars from the United States and everything in between.