Intrepid gun dog has a blinder on opening day 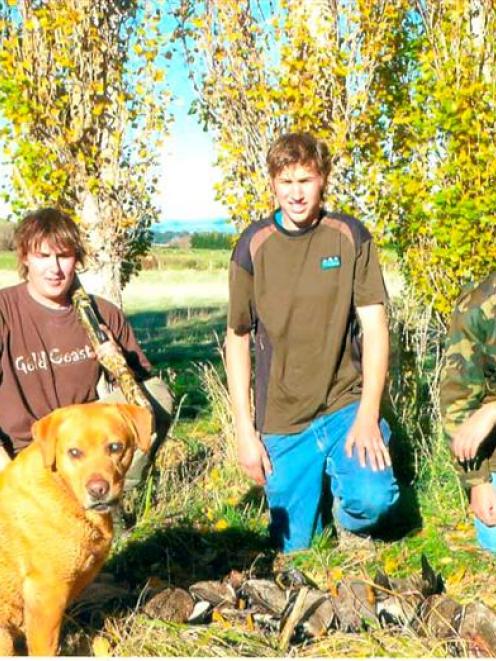 Brad (22, left), John (17) and Micheal (15) Hastie were proud of their blind gun dog Jake’s performance on duckshooting opening day. He retrieved 25 ducks. Photo supplied.
When duck dog Jake went blind about a year ago, his owners - the Hastie family - thought his duckretrieving days might be over.

However, on opening day Jake proved them wrong. Once he got the scent of the feathery foe, he retrieved 25 ducks.

Gore resident Bruce Hastie said his son Brad and his nephews John and Micheal Hastie, who took Jake out duckshooting on opening day on May 2, were extremely proud of the eightyear-old gun dog's performance, considering he was blind.

‘‘They were worried that he would not be fit for duckshooting season as he only developed the blindness within the year since last opening day,'' Mr Hastie said.
‘‘Jake sometimes took a little longer to find them [the ducks] in the flax, but under their [the boys'] directions [he] always delivered,'' he said.

While Jake, who had been retrieving ducks since he was a year old, could get a ‘‘bit'' disorientated, he knew the Waimumu property where the boys went duckshooting well and he used his sense of smell to find the ducks, Mr Hastie said.
Jake was not only the family's gun dog, he was part of the family, he said.

Since going blind, Jake had managed to find his way around the family home with ease, except when someone left an object in his way, he said.

However, Jake had managed to adapt to those tricky situations.

‘‘If I tell him to watch out he'll go round it.''
When asked if Jake would be out with the boys duckshooting next year, Mr Hastie said it depended on how ‘‘good'' he was.