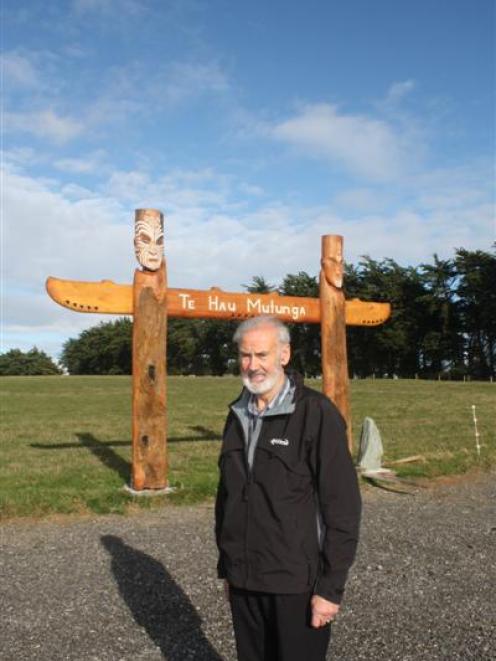 Waihopai Runuka kaumatua (elder) Michael Skerrett at the entrance to the Maori urupa (cemetery) on Mason Rd, on the eastern outskirts of Invercargill. Photo by Allison Rudd.
The establishment of a urupa (cemetery) in Invercargill where Maori can be buried in accordance with traditional customs and protocol has finally given local iwi a place to lay unclaimed bones to rest.

For decades, koiwi - the found bones of unknown Maori people - have been held in a non-public Wahi Tapu room at the Southland Museum and Art Gallery.

Now, in what Invercargill Maori kaumatua (elder) Michael Skerrett hopes will be the first of many such ceremonies, a skull has been uplifted from the museum and buried at the urupa.

The private dawn ceremony last month was a special and moving occasion, he said.

The skull, found at Wright's Bush many years ago, was assessed by a bioarchaeologist as that of a Maori woman aged about 30 at the time of her death, he said. Because of that, women were selected to carry it to the urupa and ''call'' their ancestor to her final resting place.

She was buried beside a large piece of argillite rock from Colac Bay which has been named ''te punga maumahara o nehera'' - translating as the anchor of memories from long ago.

''It was emotional. After the karakia [prayers] the birds started to sing at just the right time.''

Mr Skerrett saidThe museum held many koiwi which he said had ''popped up'' on beaches or farmland over many decades.

Mr Skerrett, a kaumatua with the Waihopa Runaka said some of the kaumatua at the four Southland runanga wanted koiwi to be re-interred where they had been found, while others favoured burial at the urupa.

''We will let them come back to us in their own time. We hope eventually that many more koiwi will be buried at the urupa with the proper respect and ceremony.''

It was likely koiwi found in Southland and held in museums in other parts of the country - including Otago - would also be returned home, he said.

''We will bury them together at the back of the urupa. Our ancestors will be an anchor.''

Invercargill Maori have been trying to establish a urupa for decades.

Last year, the Invercargill City Council passed a bylaw enabling a 2ha cemetery reserve site next to the Seaward Downs Reserve to become an urupa. It is owned by the council at present but will be sold to the Waihopai Runaka for $1.

The runaka had spent about $80,000 creating a car park, installing a shed and planting a shelter belt of native trees, Mr Skerrett said. Dunedin carver James York, who grew up in Invercargill, was commissioned to create the entrance gate.

No modern burials had taken place at the urupa yet, but Mr Skerrett said he knew of many Maori, including himself, who planned to be buried there.

''This is where I will come, but not too soon, I hope. It gives me great comfort that we have a place where we can carry out burials according to our heritage and culture, and that I will be able to link back to those things our ancestors valued.''