By Abbey Palmer
0 Comments
For one Southland couple the official opening of Invercargill’s transitional museum and art gallery was all about being able to share Southland’s heritage and whakapapa.

Andrea Jerry Ryan and Tony Ryan were among the first people to tour He Waka Tuia Art + Museum when its doors opened to the public on Saturday.

"We’re here to support the kaupapa and the community," Mrs Jerry Ryan said.

"It’s a showcase of our history and the arts that go all the way back to where it all began."

Small groups made their way through the space and were given the chance to draw on their own cutout of a titi (muttonbird), which will be added to one of the displays.

Labour list MP Liz Craig was also there and said she had watched the progress of the building with excitement over the past few months.

"It’s going to be really great to have art back in the city and will, I’m sure, attract a lot of visitors." 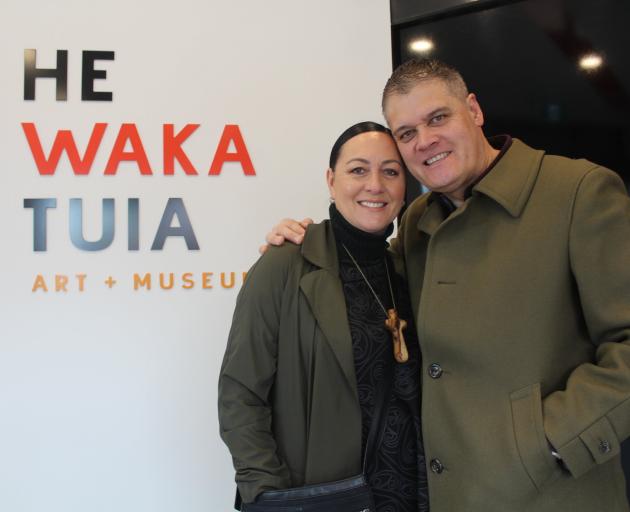 Invercargill residents Andrea Jerry Ryan and Tony Ryan were among the first people to see the city's newest addition, He Waka Tuia Art + Museum. PHOTO: ABBEY PALMER
He Waka Tuia Art + Museum co-manager Gemma Baldock said one of the most important things about the site was that it provided access to something the city was previously missing.

"That’s [access] to the collections, the knowledge, the community ... It’s really special."

When both organisations closed down, the community was given the chance to have its say on what it wanted to see replace them.

How the space had been set up was a reflection of those voices, she said.

"We’ve picked four key themes from those consultation documents around how the community wanted to experience their collections and we’ve split the space ..."

Visitors would now be able to view or interact with a range of different installations — all of which showcased what Southland was all about, she said.