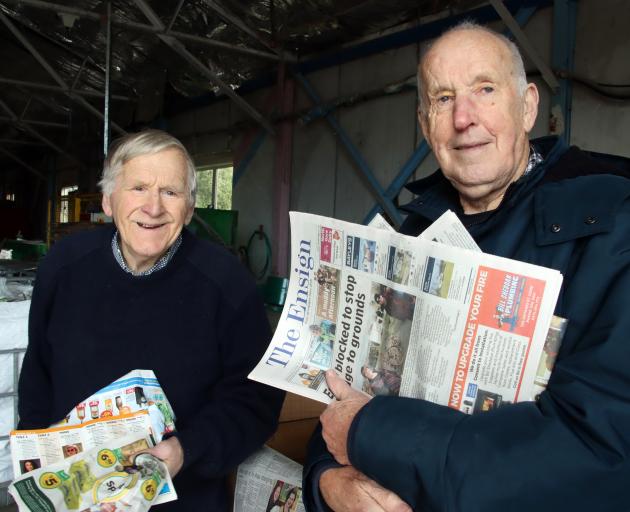 Gore Pakeke Lions recycling convener Neil McPhail (left) and club member Doug Dixey are encouraging residents to drop newspaper off at the factory where it can be recycled, rather than going out in the district’s red bin collection. PHOTO: SANDY EGGLESTON
The Gore Pakeke Lions are back in the paper recycling business as the price for recycled paper stabilises.

In February last year, the recycling factory the club runs in the town stopped collecting paper.

The market price for the paper had dropped so low the group had to pay to dispose of it.

Since 2010 about 200 tonnes of waste paper a year has been baled and sold for recycling at the Hokonui Dr premises.

Recycling convener Neil McPhail said it was great news the price had gone up.

"Twelve months ago paper was valueless.

"Now we are looking to the public to bring their papers."

In March the payout reached $100 a tonne but the group waited to start processing the paper again.

"We hesitated just in case this was just a flash in the pan."

The price was guaranteed for three months.

The money the project made was channelled back into community projects and in 10 years that added up to about $800,000.

After the factory stopped collecting newspapers the only option was for residents to put them in the red rubbish bins.

It should save the Gore District Council money, as it no longer had to pay to dispose of the paper, he said.

The price of cardboard had also increased per tonne from $30 to $170.