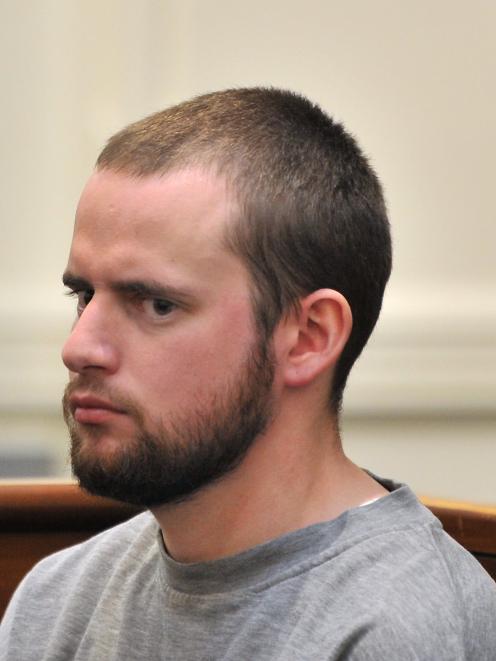 Ruairi Taylor. PHOTO: ODT FILES
A police officer who was rammed by a motorist posing as an Islamic extremist then chased with a tomahawk says he believed the man intended to kill him.

Ruairi Kern Taylor (25) pleaded guilty to attempting to cause grievous bodily harm, intentional damage and assault with a weapon, and was jailed for three years, three months before the High Court at Dunedin yesterday morning.

A charge of attempted murder was previously dropped by the Crown.

The victim, Constable Steven Treloar, spoke publicly about the incident for the first time yesterday.

The officer, who had been in the job six years at the time, said it was something he would not want anyone to go through.

Const Treloar said he struggled to come to terms with the fact a member of the community he served had turned on him for no apparent reason.

He also repeatedly questioned his decision to run from the scene when Taylor chased him with the axe, rather than remain and protect the public.

"I believe he intended to kill me," Const Treloar said.

Justice Rachel Dunningham said the facts of the case were "somewhat unusual".

Taylor quit his job at a Tapanui business on September 4 last year then bought a tomahawk from a shop in Gore.

He retrieved a sheathed knife from his home and strapped it to his leg before heading north in his Subaru.

First he pursued an unmarked police car but continued driving when it turned into the Gore Police Station.

Later, Taylor chanced upon Const Treloar, who was sitting in his patrol vehicle with lights activated, having pulled over a motorist.

The defendant blasted "religious music" on his stereo and slammed his car into the back of the stationary police car.

Const Treloar’s head smashed into his windscreen and the force shunted his vehicle into the one he had stopped.

While Taylor smashed the officer’s windows with the axe, the victim used the police radio to call for backup.

He shuffled over the car’s central console and escaped through the passenger door as the defendant gave chase with the tomahawk raised above his head.

Taylor yelled "Allahu Akbar" (God is great) while running but gave up the pursuit after 40m.

He returned to the vacant police car, smashing both headlights and hacking holes in its side panels with the weapon, causing more than $30,000 worth of damage, the court heard

Other units which rushed to the scene found Taylor wearing a police hat and jacket from Const Treloar’s car while "yelling religious material from a Koran he had in his possession".

He later told police he was not a practising Muslim and had wanted to be shot by police.

The judge said Taylor’s playing on racist stereotypes about Islamic extremism was an aggravating factor.

"You have indirectly harmed the community of law-abiding Muslims," she said.

The offending was clearly premeditated as the defendant had armed himself and "used religious props" to heighten concern.

Defence counsel Sarah Saunderson-Warner said Taylor was not motivated by any grudge against the officer involved or even the police in general.

It came from a desire to self-harm, and was sparked by "a number of stresses building up in him which he was effectively ill-equipped to deal with".

A psychologist found no specific diagnosis of any mental health issue but recommended the defendant be monitored.

Taylor was ordered to pay $2000 for the "extensive and deliberate damage" he caused, to be paid at $20 a week once he was released from prison.