The Vining family members, who are Ngāi Tahu descendants, were appalled at the insensitivity as well as the foolishness shown by those who removed the pounamu from Mr Vining’s headstone at the Winton cemetery, his wife Melissa said.

"We are all devastated. We are shocked that someone would do that," Mrs Vining said.

She urged for the gift to be returned as stealing, especially items of significance, always came with repercussions.

"We are just hopeful someone will just quietly return it to the cemetery." 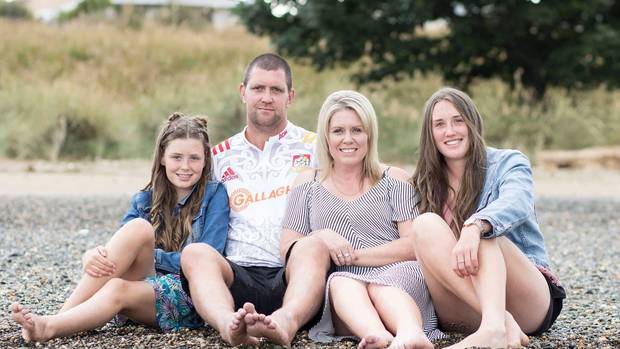 Blair and Melissa Vining with their two daughters Lilly and Della-May. Photo: supplied
Waihopai Runaka kaumatua Michael Skerrett said, from a Maori cultural perspective, stolen items became automatically tapu (forbidden) and could bring utu (negative energy cost) into an entire household of the home into which it was taken.

Getting rid of the stone would not lift the tapu nor remove the utu. It had to be returned.

"No good can come of things by doing things like that ... It’s one of those very serious things for Maori, especially taking it from a gravesite. That’s dreadful."

The unique and distinctly shaped stone was a gift from pounamu carver Trevor Willetts.

Mr Willetts said his real feelings about the theft were not printable.

"It’s horrific. I just can’t get my head around it at all."

Culturally, pounamu was meant to be gifted.

He often gifted pounamu to friends. But he believed the Vining family were people who deserved recognition for the sacrifices they had made for Southland and Otago.

Each member of the Vining family was given a necklace cut from the same stone, with the additional piece for Blair, which had been stolen.

Mr Willetts said his gift was given in recognition of the sacrifice Mr Vining made by spending the final weeks of his life fighting for a cause to help others.

"To steal off anyone’s grave is just mind-blowing. But to steal from Blair Vining’s grave - you don’t get a more special human being than that."

She hoped the pounamu had been picked up by mistake by someone who had not realised its importance.