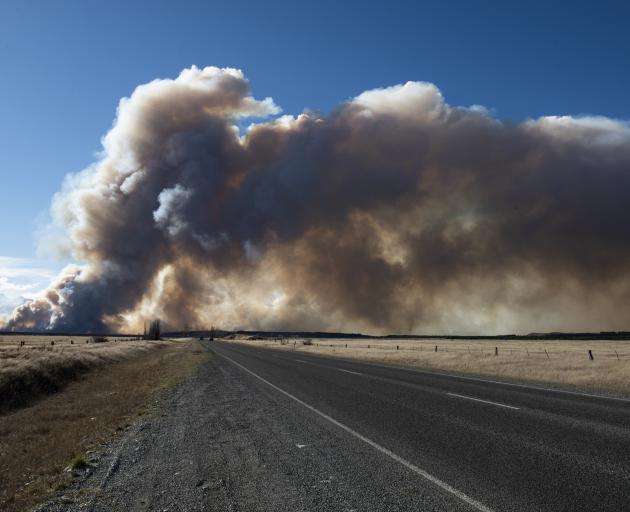 Smoke billows across SH80 from the fire near Twizel. Photo: Murray Eskdale

The MetService has issued strong wind warnings for much of the South Island as firefighters battle blazes in the Mackenzie district, near Outram and on the outskirts of Oamaru.

The MetService said a strong west to northwest flow lies over central and southern New Zealand today ahead of an oncoming front, which is forecast to move north over the South Island tonight and early tomorrow morning.

NZTA has this morning issued a strong wind warning for motorists on SH1 between Dunedin and Palmerston.

Wind had also picked up in Invercargill and Fire and Emergency New Zealand were called out to a burned out garage after concerns its roof was being lifted up in the wind.

A spokeswoman said one Invercargill crew was called to the Fulton St property at 12.15pm but "they left it in the hands of the council" whether or not to demolish it.

"We did attend in the first instance but there wasn't too much we could do."

Wind warnings are in place for all of Otago, Canterbury and Southland and the MetService warned strong wind gusts could damage trees, powerlines and unsecured structures.

Driving conditions across the South could be hazardous, especially for high-sided vehicles and motorcycles.

The Canterbury High Country - where firefighters are battling a massive blaze - is expected to experience the worst winds with gusts reaching 130kmh, with the warning in place until 5am tomorrow.

Elsewhere the MetService is warning of gusts of up to 120kmh.

In addition to the severe northwesterly winds, the front is also expected to deliver a brief burst of heavy rain to western parts of the South Island, and a watch for heavy rain remained in force for Fiordland, Westland, and the Otago and Canterbury Headwaters.

"So we are telling people not to light up.

"Whether it’s a large burn or a small burn it doesn’t really matter. With these winds coming through, what we are saying is to hang off until we get some better weather."