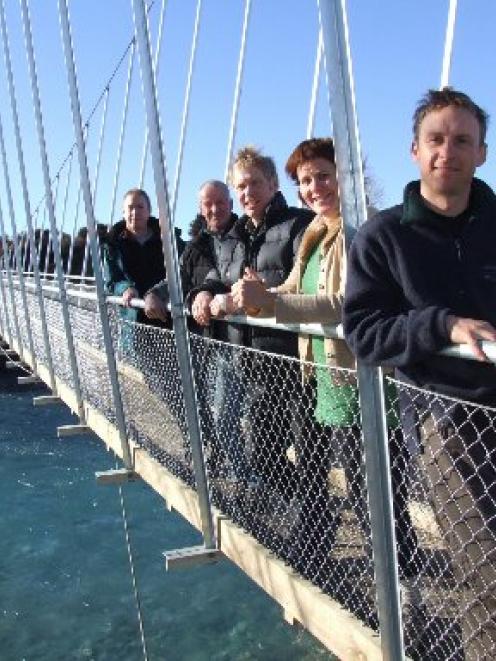 Upper Clutha Tracks Trust executive members (from right) Tim Dennis, Rachel Brown, Grant Fyfe, Tom Rowley and John Wellington on the Hawea River swing bridge. Photo by Matthew Haggart.
A leader in opening up public access by building tracks, the Upper Clutha Tracks Trust is a finalist in the Inland Otago Conservation Awards. Matthew Haggart talks to trust chairman Tim Dennis about its mission to develop a network of trails and public access around the region.

Initial steps taken by the founding members of the Upper Clutha Tracks Trust might well provide a pathway for groups charged with establishing trails around New Zealand.

While much has been made of the Government-led National Cycle Trail projects, the trust has effectively already established its own regional trail network .

The trust has built a trail network of more than 100km around Wanaka during the past three years and was recognised at the TrustPower Community Awards recently when it won the heritage and environment category.

Trust chairman Tim Dennis said being nominated for the conservancy award was fantastic.

In 2006, the fledgling trust produced the Upper Clutha walking and cycling strategy for the Queenstown Lakes District Council.

Spurred on by the passionate vision of founding chairman, the late John Pawson, the trustees had always been focused on "making it happen", Mr Dennis said.

"For us, it has always been about getting out there, getting on with things, and making things happen on the ground," he said.

Lake Hawea Station farmer Tom Rowley was co-opted by the trust shortly after Mr Pawson died in a climbing accident in 2008.

Mr Pawson's early leadership, vision and drive had provided the trust with the inspiration to forge on , Mr Dennis said.

The trust's first project - the Hawea River Track - was launched in November 2006 with the assistance of a $25,000 seeding fund from the QLDC.

Since the 11km track, which follows the Hawea River and links the townships of Lake Hawea and Albert Town, was completed in July 2009, the trust has quickly moved to establish more trails.

A 14km trail linking Glendhu Bay and following the shoreline of Lake Wanaka to Roys Bay in Wanaka was completed in December 2009, and less than a year later a new track from Albert Town was completed along the Clutha River.

The trust has two more projects in its immediate sights - a track along the southern shoreline of Lake Hawea connecting the township to Johns Creek, plus an extension of the Clutha River Trail, which will connect the existing trail to Luggate.

"Each track has its own personality and attraction because of their different characteristics," Mr Dennis said The achievements of the trust were a credit to the team involved.

Input and assistance was given by private landowners, the QLDC and the Department of Conservation, he said.

A long-term project for the trust was to establish a trail along the Clutha River, which will connect Wanaka to Clyde - a potential link in the National Cycle Trail which will connect with the existing Central Otago Rail Trail and with a planned Clutha Gold-Roxburgh Trail.

An initial approach to the New Zealand Cycle Trails project organisation for a trail between Wanaka and Clyde had been knocked back, but Mr Dennis remained hopeful it would, in time, be recognised as a valuable addition to a national tourism network.

Mr Pawson's galvanising influence on the trust remained, and it was his idea for the Wanaka-Clyde link, Mr Dennis said.

"It was very clear that John was right in his vision. He would want us to go for it and stick to our guns."

• The winner of the Inland Otago Conservation Awards will be announced at a ceremony in Cromwell tomorrow night.