Congestion at country's 'most instagrammed' spot

Melanie Blairvacq and Florian Maimi, both of France, hoped to avoid crowds by starting the Roys Peak ascent at 3am. Photos: Kerrie Waterworth
Wanaka's Roys Peak Track reopened last week after being closed for lambing but already the perennial issues of illegal parking, freedom camping and track congestion are back.

The 100-space car park at the start of the track 6km from Wanaka township on Mt Aspiring Rd was full before 9am yesterday. 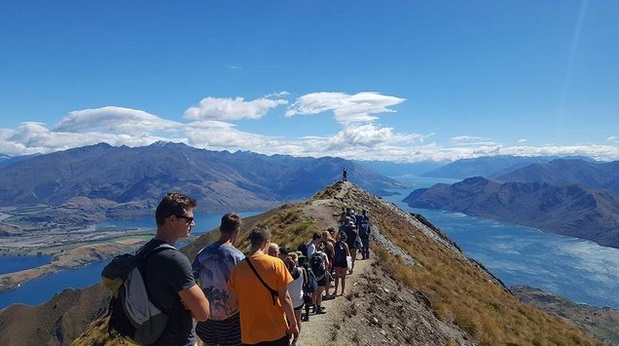 This image. posted on Reddit and captioned the "social media queue", shows a long line of hikers, all waiting to take the same picture on Roy's Peak. Photo: Reddit
By 4pm, vehicles were illegally parked on both sides of Mt Aspiring Rd up to half a kilometre north of the car park.

French tourists Melanie Blairvacq and Florian Maimi said they had arrived at the car park at 3am in the hope of ''being alone'' on the hike but they found 40 others on the summit at sunrise.

''On the way back down we saw so many coming up the track and a lot of them didn't have proper hiking shoes, one person was wearing flip flops and we saw a mother with a baby in a backpack who had no water bottle or anything,'' Ms Blairvacq said.

''People just want to go up to get the instagram picture and then that is it,'' she said.

Roys Peak Track car park was full before 9am.

The five to seven-hour, 16km return trip was one of the Department of Conservation's most popular day walks.

The view from the summit has the reputation of being ''the most instagrammed spot in New Zealand''.

The car park and walk are managed by Doc but Queenstown Lakes District Council spokesman Jack Barlow said the council's freedom camping ambassadors visited the car park every few days to educate visitors about ''the dos and don'ts'' for the car park, and hand out a new Responsible Camping leaflet. 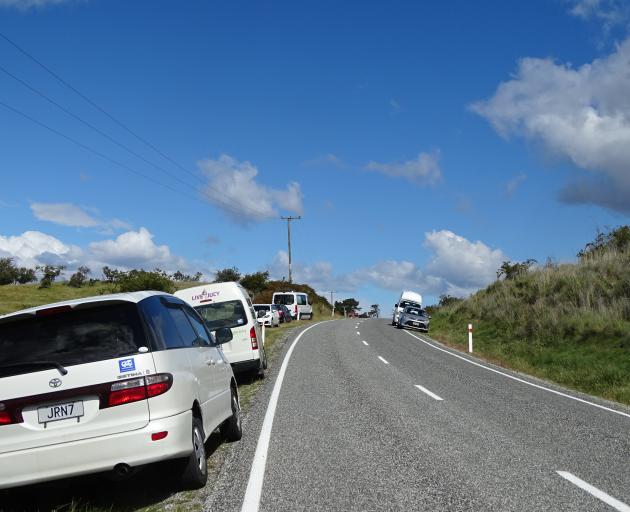 By late afternoon, both sides of Mt Aspiring Rd north of the Roys Peak Track car park were used for illegal parking.

Earlier this week, Wanaka police reported issuing 37 fines in one day to vehicles parked outside the Roys Peak car park.

Yesterday morning, the Otago Daily Times spoke to several drivers and occupants of cars parked on Mt Aspiring Rd and none of them knew they were parked illegally.