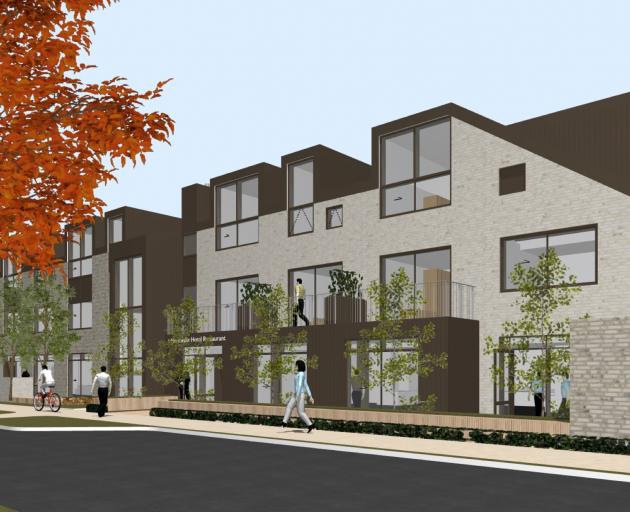 An architect's impression shows the hotel proposed in the Northlake Special Zone, Wanaka. Photo: Studio Pacific Architecture
The word "harmony" was yesterday introduced to the debate over a proposed 113-room hotel in Wanaka's Northlake special zone.

Wellington lawyer James Gardner-Hopkins made submissions on behalf of the Wanaka Community Supporting Our Northlake Neighbours Society, which is opposed to the hotel.

He argued the Queenstown Lakes District Council required activities in the zone to be developed in an integrated manner.

For the meaning of "integration", Mr Gardner-Hopkins cited High Court Judge Chisholm likening "integrated management" to "whether there would be harmony".

"So, if there is not harmony between the proposed hotel use, and the existing residential uses, then integrated management ... is not being achieved," Mr Gardner-Hopkins said.

Asked by Mr Munro for his definition of "harmony", Mr Gardner-Hopkins suggested in the Northlake context a small hotel, with not a lot of buses.

He reminded the commissioners to "keep one eye" on part two of the Resource Management Act - which promotes "sustainable management" - and not "relegate it to some sort of cross-check.

"It is relevant as part of your consideration."

Mr Munro said no-one had asked them not to consider part two, and they would be analysing it and keeping an open mind.

He pointed out that in contrast to traffic created by other uses of the land, the hotel would have people arriving and leaving on four coaches in brief periods each day.

"The hotel is dead as a doornail the rest of the time."

The owners of about 300 Northlake properties were prohibited from making submissions on the hotel proposal because of a covenant in their sale and purchase agreements but about half a dozen were present.

The hearing was adjourned until next Friday to allow Mr Goldsmith time to prepare written closing remarks.