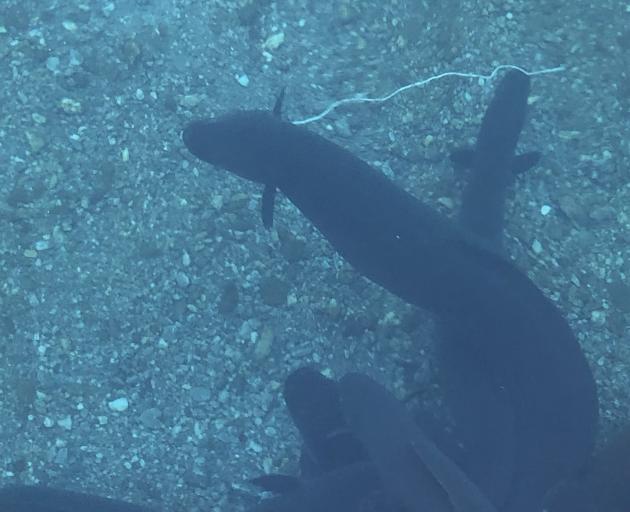 Wanaka’s giant eels appear to have swallowed white string.PHOTO: LAYTON CRAIG
Several of Lake Wanaka’s famous giant eels are trailing long pieces of white string, creating the suspicion people have been illegally fishing from or near the Roys Bay jetty for the native fish.

He told the Otago Daily Times he had reported the incident to the Department of Conservation and been told it was not able to respond during the Level 4 lockdown.

However, Doc staff told him they would discuss the eels’ plight at a meeting and respond as soon as the Covid levels allowed, Mr Craig said.

"Hopefully, they will be able to do something in Level 3."

Doc Central Otago community senior ranger Nicole Sutton said she was seeking a response from Doc on what it intended to do about the eels.

She confirmed if people came across sick or injured wildlife during Alert Levels 4 or 3, Doc’s emergency hotline (0800 DOC HOT) was operating as an essential service.

Responses would be assessed case by case but in most cases Doc’s ability to respond would be constrained, she said.

Lake Wanaka’s longfin eels can grow up to 2m and live beyond 60 years.

They are often fed from the jetty and are a tourist attraction.

The regulations were created to protect sport fish such as trout and salmon. Doc was the agency to respond to issues with eels, Mr Van Klink said.

Mr Craig said there had been a big response to his photos on social media.

Posts had mentioned seeing children fishing with bait and string in the area, he said.

He found it a "little bit frustrating" that people might try to catch the eels.

"A little bit of education would not go amiss."

Eels (tuna) have long been of significance to Maori as a food source but are facing major changes to their environment that limit their habitat and make it harder for them to swim to the sea to breed.

Lake Wanaka’s eels are assisted in their journey to the sea by fisherman contracted by Contact Energy to transfer them over the Roxburgh Dam in the Clutha River.

From there, they travel 5000km to breed in a region of the Pacific known as the Tonga Trench, between Fiji and New Caledonia.

The fishermen caught and transferred about 400 during the 2021 season.