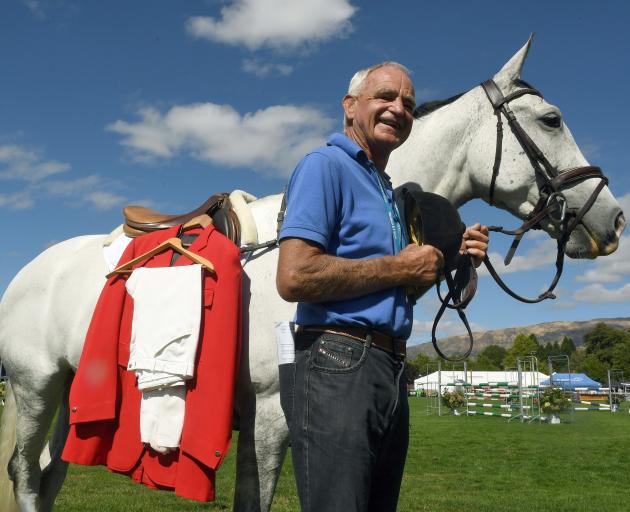 Mr Lucas (74), who will be in his usual position leading the grand parade today, has attended the show for 57 years.

He competed for many years in jumping events and also exhibited sheep and wool at the show while farming at Timburn Station, near Tarras.

Now semi-retired and living in Wanaka, he is chief steward for round-the-ring jumping at the show and also helps out with the FEI showjumping classes.

For the grand parade, he has borrowed Stratos from showjumper Tyler McKee, a horse he had ridden in the parade previously and which was very well behaved, Mr Lucas said.

"I've ridden enough that I keep out of trouble."

The changes he had seen at the show over the years were "unbelievable" - what was once just a small ring now spread "right up to Wanaka".

It was a busy time for him - not only on the two show days but also leading up to it, when there were various working bees.

But he liked to do something for the community and was honoured to receive life membership of the Wanaka A&P Association a few years ago, he said.

"It's nice to know you're recognised for something."

Show chairman Grant Ruddenklau said he was a happy man on the first day of the show yesterday as the sun was shining, helping dry up the mud caused by the 35mm-40mm of rain on Thursday, which caused some issues.

The showgrounds had to be shut at 6pm and everyone sent away. The electricity was turned off.

It opened yesterday morning so people could access their sites, quite a few which were flooded.

Water was pumped from some sites and loads of sawdust and gravel had been carted in. But then the sun came out and the day was "beautiful". Good weather was forecast for today.

"It's one of those things - no-one wants a wet Wanaka Show ... But it was very, very dusty the day before. We've got no dust. Farmers will have a smile on their face."

While yesterday's crowd numbers were not available yet, he believed they would be on a par with previous shows.

Mr Ruddenklau paid tribute to the "amazing" team behind the show, which included the member-elected board "which was a new structure that he was excited about" and the many volunteers.