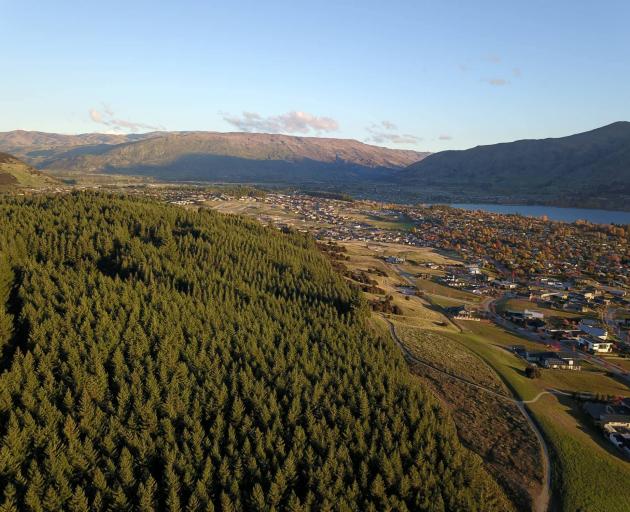 Wanaka's Sticky Forest. To the right of the forest is the Peninsula Bay subdivision, and Roys Bay is on the far right. Straight ahead in the distance is Pisa Range and Cardrona Valley. PHOTO: JORDAN MCKENZIE
A panel of independent commissioners has recommended the case for Wanaka's Sticky Forest to be rezoned for residential development be rejected.

Christchurch real estate director Michael Beresford made a submission to have 20ha of the 50ha site rezoned from rural to low-density residential and large lot residential.

His case was heard by an independent hearing panel at Edgewater Resort in Wanaka last June. 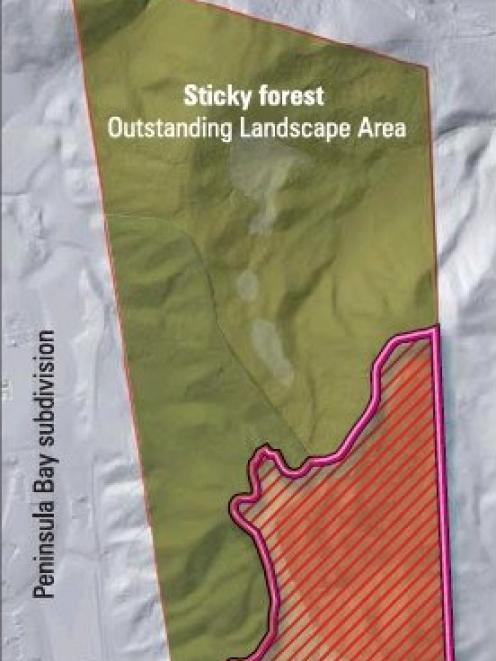 The land is held by the Crown for the 1020 descendants of the 57 original Maori owners who were to have land transferred to them in settlement of a claim under the South Island Landless Natives Act of 1906.

The report was released earlier this week in regards to stage one of the Queenstown Lakes District Council's proposed district plan.

The report said that while there was merit in Mr Beresford's contention that some parts of the site were suitable for urban development, the "lack of certainty" as to the nature and location of legal access rights to the site made it impossible for commissioners to accept the rezoning proposal.

Section 106 of the Resource Management Act states that consent authority may refuse subdivision consent if "sufficient provision has not been made for legal and physical access to each allotment to be created by the subdivision".

The recommendation was welcome news for local mountain bike enthusiasts, who use the array of trails spread throughout the forest.

Bike Wanaka spokesman Simon Telfer said the group was "grateful for the commissioners' recommendations and that Sticky will not have houses built all over it".

"We see Sticky Forest as Wanaka's adventure playground for many generations to come," he said.

However, that may not be the case.

In his submission, Mr Beresford said if the decision was made to carry on actively managing the land as a productive forest then public access was likely to be restricted.

Likewise, the commissioners' report said the land owners had no obligation to allow public recreational use of the site.

"While the current recreational use of the site is of considerable value to the Wanaka community, it is available to that community entirely at the discretion of the landowners who would be perfectly entitled to erect fences at the boundary and exclude the public from it."

"If Council wants to own the Sticky Forest land in order to preserve access to it for public recreation purposes, it needs to purchase it from the beneficial owners at a fair value," the report said.

Mr Beresford declined to comment on what the future of the site might hold and whether he would be making any further submissions on the proposed district plan.

The report will be presented to an upcoming council meeting for a formal decision that will take legal effect when published.