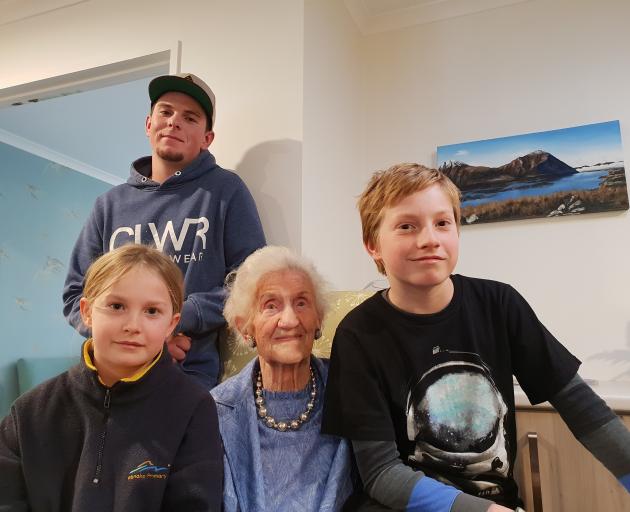 Joining Barbara Cruickshank for her 102nd birthday celebrations are her great grandchildren Heath (21, back), Dani (8, left) and Xander (10). PHOTO: SEAN NUGENT
She may have just turned 102, but Wanaka resident Barbara Cruickshank is still a bundle of energy who lights up with excitement every day.

With a grin stretching from ear to ear, she celebrated her birthday yesterday at her Elmslie House residence surrounded by family and friends, along with a performance from Wanaka Ukuleles and, of course, a slice of cake.

The oldest resident at the home, Mrs Cruickshank said she had "no idea" how she had managed such longevity, but seeing her six great grandchildren grow up "is what keeps me going now".

"What they know at their age is so much more than what I did. Kids are taught everything nowadays."

Her advice for them was "just to be good".

Born in Liverpool, England, Mrs Cruickshank moved to Queenstown with her family when she was about 5, and stayed until she left school.

Later she married Cyril, and together they raised their family in Mataura.

Despite suffering a stroke in 1987 and losing the ability to use her right arm, Mrs Cruickshank has had no health problems since. She still makes her bed every day, keeps a scrapbook and reads a lot.