Wild weather to ease after night of havoc 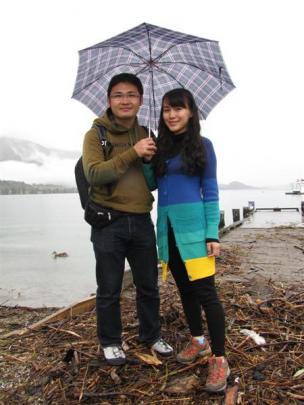 Lei Huang and Xlaolu Du, of China, did not mind the waterfront debris left by a swollen Lake Wanaka yesterday. Photos by Mark Price. 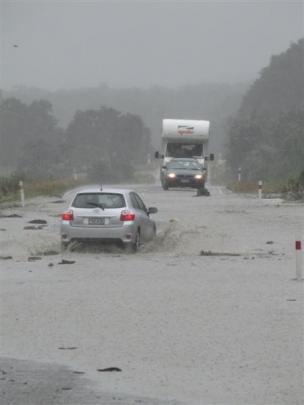 Campers have fallen victim to an atrocious start to the year, with heavy rain, gales and snow plaguing the South Island and lower North Island.

"People will only put up with rain for so long, and even if it's a case of them shortening their holidays ... and I guess a few people sitting at home, if they're watching the weather might delay or not even come."

The Queenstown campground was not quite as badly affected. It caters for a lot of international visitors, who were not easily able to change their plans, he said.

Mr Hartshorne said it was "bucketing down" in Queenstown today (Thur).

"It's probably one of the wettest Januarys I can remember. But it's meant to be fine tomorrow."

Flash flooding has been reported in Canterbury.

Reports were received by police this evening that a large surge of water was visible from the air moving down the Waimakariri River towards the sea, and police were requesting the public move away from the low lying river bank areas of all Canterbury rivers.

River and lake levels were continuing to rise in the Wakatipu, Wanaka, and Hawea lakes catchments. Lakes Wanaka and Wakatipu are high and rising. Both were now expected to peak around midday tomorrow, a spokesman said.

Lake Wakatipu was at 311.01 metres and rising, and was expected to peak at 311.4m, which could cause minor flooding in low-lying parts of Queenstown.

Lake Wanaka was at 279.3m and rising and was expected to peak at 280m. It could also cause flooding of low-lying areas around the Wanaka waterfront, the spokesman said.

All South Island roads closed by slips and washouts today were expected to reopen tomorrow.

"Good progress has been made clearing these slips - one at Pivot Creek, 10kms north of the Haast Pass summit and the other near the Gates of Haast - and work is continuing in an attempt to get the road opened later tonight."

A slip 5kms west of Klondyke Corner closed State Highway 73 from Cass to Arthur's Pass for much of the day. About 500 cubic metres of debris fell onto the road and contractors were on site clearing the road.

SH 94 Milford Road, from Hollyford to Milford Sound, had reopened but only for bus convoys carrying cruise ship passengers back to Milford Sound and bringing out walkers from the Milford Track. It remained closed to all other traffic until tomorrow morning.

Further north, the Greater Wellington Regional Council was calling for people to heed the total fire ban at Porirua's Whitireia Park following a small blaze on the park's western beach on Sunday.

The driftwood fire flared up late in the afternoon, covering an area of about 20x30 metres.

"The cause appeared to be a beach fire that wasn't properly extinguished. In fact, our Parks staff had noticed an increase in evidence of beach fires, such as charred driftwood, before the fire on Sunday," Regional Council's Western Principal Ranger Wayne Boness said.

And high winds have prompted NZTA to advise motorists travelling over the Rimutuka Hill Road (SH2) between Upper Hutt and Featherston to take extra care due to strong and unpredictable wind gusts.

Winds on the road were gusting between 80 and 100km/h.