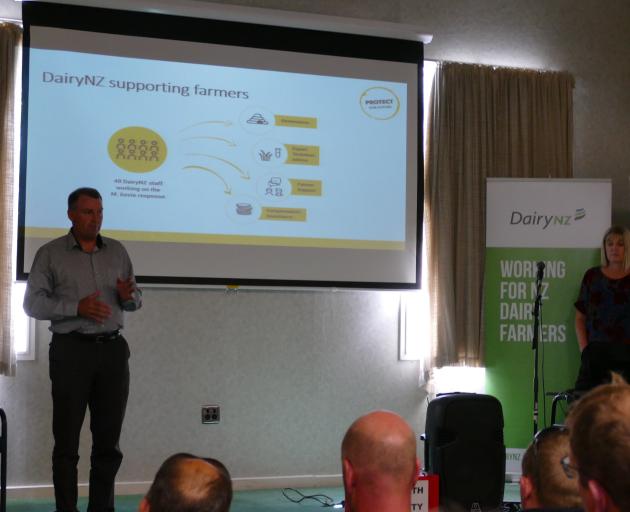 DairyNZ director Colin Glass outlines the case for an additional levy to fund the farmers' share of the Mycoplasma bovis response. Photo: Ken Muir
Frustration about the management of the response to Mycoplasma bovis has been the dominant theme at DairyNZ farmer meetings throughout the country.

That theme continued at a meeting in Gore last Friday attended by about 50 people.

DairyNZ has been holding farmer meetings around the the country to discuss the need for the industry to pay its share of the response.

DairyNZ farmer director Colin Glass said farmers were feeling frustrated that they had not been listened to.

''They are demanding increased accountability for any money they have to pay towards the response,'' Mr Glass said.

DairyNZ has proposed farmers pay a maximum 3.9c per kilogram of milksolids levy over the next two seasons, with the prospect of reduced levies in the future. The amount proposed for the next two years is to cover costs already incurred.

Mr Glass said going into partnership with the Government and the beef sector significantly reduced the $870million cost.

While there was some discussion at the meeting about the split of costs being borne by dairy farmers compared with beef farmers, Mr Glass said the reality was the outbreak began in the dairy sector and it was the dairy sector which would be most affected if the disease persisted.

''Communicating practical knowledge of farming systems to the Ministry of Primary Industries (MPI) is proving to be an ongoing challenge for DairyNZ,'' Mr Glass said.

''However, if dairy farmers support us in going ahead with the levy, it will at least provide a seat at the table where we have a chance to have input into how the response is being carried out.''

He said the alternative was for the government to decide how to cover the costs of the response, with the dairy industry potentially facing reduced input into the process.

Mr Glass said the latest information from the Technical Advisory Group (Tag) indicated that the initial results from the plan to eradicate the disease were positive.

''There is a danger, however, that we can become complacent,'' he said.

''We face a long-term process to get rid of Mycoplasma bovis and we have only just begun.''

Farmers at the meeting questioned the need for additional levies to meet the response but DairyNZ's general manager of farm performance, Vanessa Winning, said there were restrictions on how existing levies could be used and the scale of the costs facing the industry was such that current resources would be quickly exhausted.

''It would also mean a drastic reduction in our existing services which are vital to the future of dairying,'' she said.

The proposed levy would add about $6000 per annum for the average farmer with 430 cows, and there was concern how this could affect already struggling operators.

The DairyNZ proposal follows on from last year's Government Industry Agreement on how to share the decision-making, responsibilities and costs of preparing and responding to biosecurity incursions.

Consultation on the levy will finish on February 28 with a response being forwarded to MPI by the end of March.

Subject to agreement, it is planned that the levy would start from June 1, 2019.