Peony growers 'flat out' until Christmas

By Ella Stokes
0 Comments
As spring turns into summer,  the peony growing season is in full swing. Last week, reporter Ella Stokes went to catch up with Mosgiel grower Rodger Whitson, of Janefield Paeonies and Hydroponics, to see what it involves.

What started as a plan to diversify their property is now a full-time business for Rodger and Cindy Whitson, who have 10,000 peony plants on their 4ha block in Mosgiel.

In 2000, Mr Whitson, originally a meat worker, and Mrs Whitson, a dispensary technician, were looking into ways they could diversify their property.

After looking at a range of flowers to grow, they decided peonies were the best option.

They started off with 2000 plants, while also keeping their jobs. 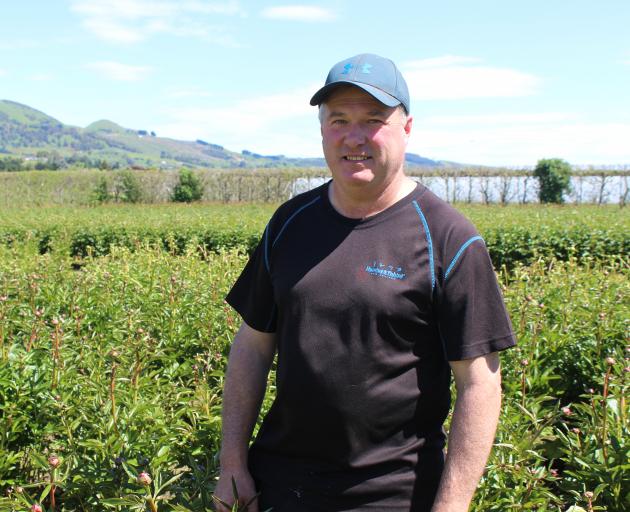 Rodger Whitson displays some of his peony plants. All will be picked by hand in the coming weeks as the season kicks into gear. Photo: Ella Stokes

After a few years of growing, Mr Whitson said they decided to ''bite the bullet and go full time at home'', and they have not looked back.

Mr Whitson said when they first started out they had a consultant but pretty much everything was self-taught.

Having no background in horticulture, their operation has been about learning from trial and error.

Pretty much everything was done by hand, so from now until Christmas they would be ''flat out'', Mr Whitson said.

With a little extra help for the busy months, they will pick, pack and chill the peonies before they are sent to Auckland where they are checked and sent on.

''There's no point having the peonies all year and then not getting it right when it counts.''

The couple export 95% of their crop to Asia and the United States and sell the rest locally, both from their front gate and at the Otago Farmers Market.

''It's pretty cool to think that your flowers are sitting in some hotel foyer in New York.''

In 2005, the couple decided to diversify and looked around to see what would be the best option.

They saw an opening for a niche product and started growing hydroponic lettuce and spinach.

They now grow a vast range of herbs, Asian greens and strawberries which are sold locally.

Mr Whitson said it was a good move for them, as the new crops were more reliable as they were grown undercover.

''Hydroponic is our backstop. If we have a major problem in the peony crop we know we have a backstop.''

Outside of the business, Mr Whitson has also been the chairman of the The New Zealand Paeony Society for nine years and last year stepped down as chairman of the Otago Farmers Market after eight years.

Mr Whitson said the couple enjoyed the flexibility of having their own business.

''When the girls were growing up, working from home was great as it meant we could get up at five and work until two if we needed to be somewhere for them in the afternoon.''

Mr Whitson said in the future they might plant more peonies but for the time being what they had would keep them busy.