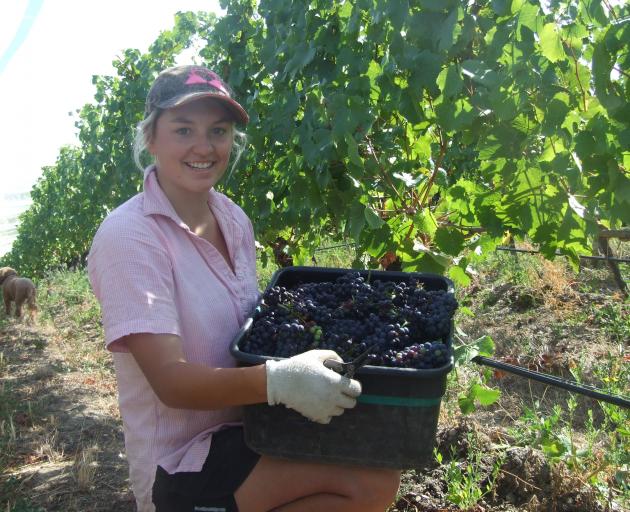 Grape picker Jodi King, of Mossburn, loads up a bucket of grapes at the Quartz Reef vineyard in Bendigo. PHOTO: ADAM BURNS
Grapes are now ripe for the picking, as the first day of autumn also marked day one of grape harvesting in Central Otago.

Vineyard staff were put to work yesterday on Quartz Reef's 30ha of fields in Bendigo.

"Sparkling wine is quite early. Our main harvest will be March 20, which is quite late compared to the rest of New Zealand.''

"The wet spring has helped us in many ways because it's taken the pressure off irrigation.

"You compare it to last year, where there was high pressure on irrigation resources, to this season, which is one of the lowest seasons of irrigation usage in many years.''

As things got under way, the issue of employment remained an early-season consideration for Central Otago growers, Mr Rolston said.

"You never really know until you get into the season proper what the employment situation is going to be like.''

About 20 vineyard staff toiled away at the Bendigo vineyard during the first day.

"We're hoping to eventually have a staff of about 40 as we get through the season,'' Mr Bauer said.

The local product has started turning heads internationally, as 40 Masters of Wine members visited Central Otago during the week.

Mr Bauer said the members "were very impressed with the region''.

"By working together, we're helping develop the reputation of the region.

"These [Masters of Wine members] are from around the world.

"They want to understand what's driving the great wine that is being made here.''