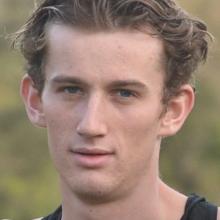 Madgwick was involved over the first half the journey with Matt Maloney, until he gradually pulled away on the run up to Port Chalmers.

"I tried not to slow down, but it was pretty tough. It was a good race overall," he said.

Coached by Olympic and Commonwealth Games 10,000m representative Robbie Johnston, Madgwick (22) was thrilled with the result of what was just his second half marathon. His  first was on the same course five years ago as a year 12 high school pupil, when he clocked 1hr 19min.

Madgwick’s last time on the podium was when he won the 10km event associated with the Queenstown Marathon last November.

The fourth-year physical education student said that the $500 winner’s cheque was an added incentive to his victory.

"The last 7km was pretty tough, especially the head wind over the final 800m," she said of going to the front earlier than she would have liked.

Pali added that the race served its purpose in letting her know where she was with her fitness.

"I’m not in the racing frame of mind at the moment, so just wanted to get a steady run in."