Perfect four for man for all seasons 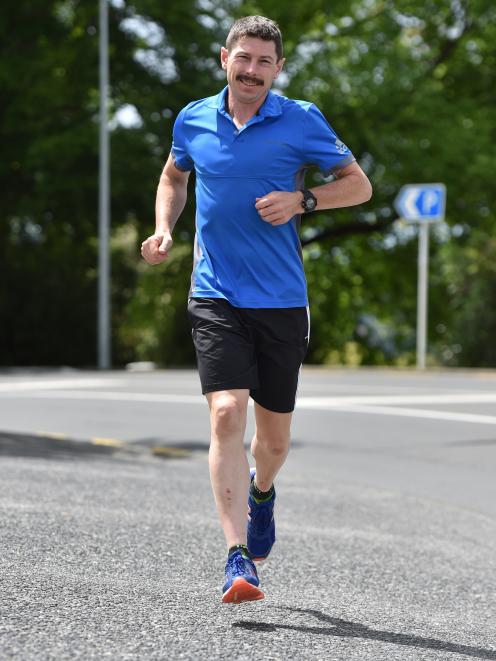 Chris Bisley goes for a jog in Dunedin after winning his fourth 100-mile race in the past year. Photo: Gregor Richardson
Completing four 100-mile races in eight months is certainly an impressive feat.

Winning all four is even more impressive.

That is what Dunedin runner Chris Bisley has achieved.

The 39-year-old gym team manager became the first person to win all four races in the Southern Seasons Miler Challenge on Saturday.

His winning time of 24hr 40min was a course record in the Krayzie Kapers 100 mile (161km) event on Banks Peninsula.

A race featuring a 600m climb on each of the 13 laps, it was a challenging and technical course.

While he had begun to feel unwell midway through, he pushed on and was able to complete the race in record time.

It followed wins in the Northburn 100, Naseby Great Water Race and Old Forest Hanmer 100 - one run in each season of the year.

''There was a massive relief,'' he said.

''I'd put quite a bit of pressure on myself to perform in all four races.

''To look at things like course records and wins, so there as a bit of pressure there.

''This one I thought I'd blown it halfway through, but I managed to come around and summon strength and finish off quite strongly.''

Bisley is in his third year of ultra-marathon running, having switched from ironman triathlon.

He had previously completed the Northburn and Naseby races, although it was his first attempt at the series.

While he knew he was capable of winning all of them, that had not been the initial goal.

'''For these ones you don't want to be too overconfident looking at results or times, but it's nice to have those goals.

''But with such a long race, always finishing is your first priority.

''I feel I've got to the point I'm starting to race them a bit more than just complete.

''But you still go in with the utmost respect for the event itself.''

His, wife, Nicky also completed the four races, over the 50km distance, making for a big celebration afterwards.

She had also helped as his crew prior to her race, making it a significant effort from her.

Bisley has not made plans for next year, but said there were races further north he would like to complete.

There were international ones too, although those relied on funding.

The ultra-distance running is something he hopes to keep going with. Many runners are still competitive in top events in their late-40s.

''It's a wonderful challenge.

''It's interesting to see how far physically and mentally you can push yourself.

''There are times in an event like that that the big self-doubts come out.

''You'll be wandering along at 2am completely exhausted, not being able to hold any food down and things like that.

''Somehow you have a drive in yourself to keep going and you know you can.

''There's something in me that likes to put myself in that uncomfortable and compromised position.''