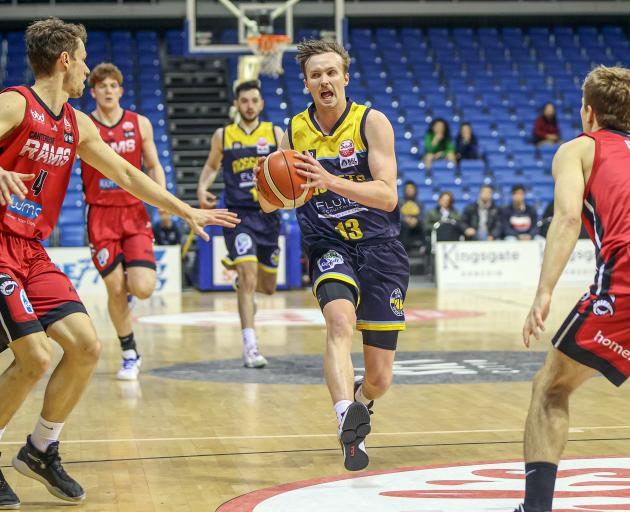 Otago Nuggets swingman Joshua Aitcheson goes all out on attack during the NBL Showdown semifinal against the Canterbury Rams in Auckland last night. The Nuggets won 97-79 to reach their first final.PHOTO: SHANE WENZLICK/PHOTOSPORT.NZ
On to the final and in dominant fashion.

The Otago Nuggets continued their strong form to sweep aside the Canterbury Rams in Auckland last night.

They led by 24 points after three quarters and ran out 97-79 winners in their NBL Showdown semifinal.

It takes them to the first final in their franchise history, where they will play the Manawatu Jets at 7.30pm tomorrow.

They provided 72 points between them, all shooting 50% or better from the field.

In that, they showed their versatility in getting to the hoop and shooting from the outside, recognising mis-matches and exploiting them.

Hunt was the most productive, putting up 33 points to go with 10 rebounds in 32 minutes.

He shot an impressive 14 of 22 from the field, showing his ability to score in the post, alongside stepping out and hitting four three-pointers.

Meanwhile Ngatai and Kenny chipped in with 23 and 16 respectively.

But it was defensively that the team set the platform.

It brought energy and lifted its intensity against a tired Rams side playing its third game in as many nights.

That created stops, as the Nuggets ferociously played the passing lanes and quickly turned that into offence.

It took just over a quarter to establish a double-digit lead and that only continued to grow as the Nuggets stayed in control throughout.

It was that defensive effort that pleased Nuggets coach Brent Matehaere most.

"I loved the way we locked in on defence," he said.

"To hold the Canterbury Rams to 79 points and to win the battle of the boards, that kind of effort was fantastic for the fellows who were on the floor.

"And the guys who came on did the same thing.

"So [I’m] really impressed with everyone getting out there and putting in that effort."

He added it was a spirited Rams side, although he felt the effects of their third night of basketball had caught up with them.

Lifting the intensity had been a focus, as the Nuggets had been wary of the Rams backcourt.

Alongside running some nice actions, they had potent threats in Taylor Britt, Reuben Te Rangi and Sam Smith.

However, the Nuggets contained that trio, who all scored to 10 to 13 points.

Offensively, Matehaere was happy as well.

While the side did not run so many actions, it was able to generate mis-matches.

But it was the way the defence locked in from the start that set the tone.

While the Rams hit shots early, it was always going to be hard to do that the whole game.

They held that double-digit lead the rest of the way, going to halftime at 54-39.

That margin became 20 early in the third, Kenny getting to the hoop a couple of times before Hunt continued his scoring spree.

They led 81-57 at the final break and while the Rams pulled back late, they were never able to threaten the lead.