Former international Eileen Grant (Lawrence) has beaten the men and become the first South Otago bowler to win 25 centre titles. Robert Wilson is next with 24 titles.

Grant beat Graeme Hill 9-7 in the final of the Henselite singles and will represent South Otago at the national final at Wellington in September.

The South Otago women beat Southland and Otago to win the regional women’s eights for the first time in 10 years.

Females skipped both teams in the final of the South Otago fours this month. 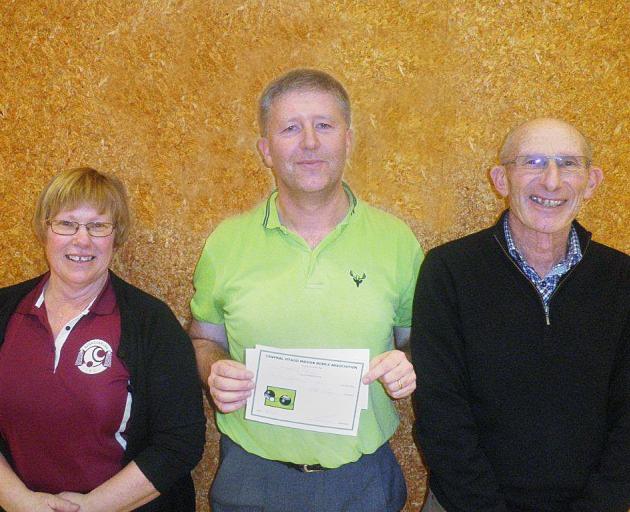 Mathew Begg (centre) won his 33rd Central Otago title in the championship singles. Also pictured are runner-up Carol Sanford and third-placed Kevin Hurley. Photo: Dave Morton.
The last time two females skipped opposing teams in the South Otago fours final was in 2006 when the skips were the late Jean Jenks and Ivy Grant, who still has the occasional game at the age of 88.

It was the sixth centre title and second of the season for Alanna Preddy who was joined by her mother Shona, brother Stephen and Christine King.

It was the eighth title for Shona Preddy, ninth for Stephen and the 10th for King who added a bar to her gold star.

Alanna (23) became the youngest South Otago bowler to gain her centre gold star when she won her fifth title in the championship triples. She will represent the South Island next month.

Anna McCaughan (17) beat the boys and won the South Otago junior singles title and will represent the centre at the national finals at Wellington next month.  Lilly Paterson was runner-up and Scott Chittock third.

Their father Mark has won five South Otago titles.  It was an important milestone for King to reach 10 indoor titles. She has won 34 outdoor titles and is second equal on the honours board behind Eileen Grant, who has won 37 titles.

Columba College pupil Anna McCaughan (Paretai) joined her father in the sport at the age of 9 and has since been joined by siblings Emma (15) and Ryan (12).

Lindsay McCaughan, the owner of the Bowl Line in Dunedin, supports his family with their bowls.

The three children competed in the Southern Districts junior singles and pairs in Dunedin this month.

Anna and Emma were beaten in the quarterfinals of the singles and Anna and Lilly Paterson reached the semifinals of the pairs.

Bloemsaat (17), who has been playing the sport for three years, won the plate singles final at the Southern Districts junior representative event when he beat Scott Chittock (South Otago) 6-0.

Twenty-six bowlers competed at the 25th annual Southern District junior singles and pairs that was dominated by South Canterbury bowlers.

Timaru Boys’ High School pupil Cameron Ellis (17), who has been playing bowls for seven years,  dominated the event and won both titles.

He beat Tiffany Wilson (Southland) 17-8 in the singles final and also won the pairs with school mate Caleb Angow when they beat his twin brother Cameron and Adam Blissett 8-5.

Mathew Begg (Manuherikia) won his thirty-third Central Otago title when he beat Carol Sanford (Bannockburn) 14-10 in the championship singles at Alexandra this month.

Begg, the best indoor bowler in Central Otago, tops the honours board and has won 18 more centre titles than Gloria Hurley (Bannockburn) who has won 15 titles.

Begg’s best national performance was to win the Henselite singles in 2004. He is one of only six Otago bowlers to win the champion of champions event that was first held in 1975.

Kevin Hurley will represent Central Otago in the Henselite singles final  in  Wellington in September and will be joined by  Eileen Grant (South Otago), Daniel French (Otago) and Brian Hotton (Southland).

Lindsay and Dot Watt (Alexandra) 9-5  in the champion pairs.

Ted McKewen and Tony Kane (Alexandra) were the only unbeaten team and won the Upper Clutha Indoor Bowls Sub-Association 2-4-2 pairs at Lowburn.

The New Zealand interclub sevens and mixed pairs and national club championships will change back to a regional qualifying event next summer. The winners will advance to the national finals.This year the winner of the centre event qualified for the national final. The change of format is designed to reduce costs.

The zone six interclub Sevens for teams from South Canterbury to Southland will be held at Central Otago (men) and North Otago (women) on January 20 and 21.

The mixed pairs and men’s and women’s singles, pairs, triples and fours will be held at the Taieri Club in Dunedin from March 7-20.

In the last month