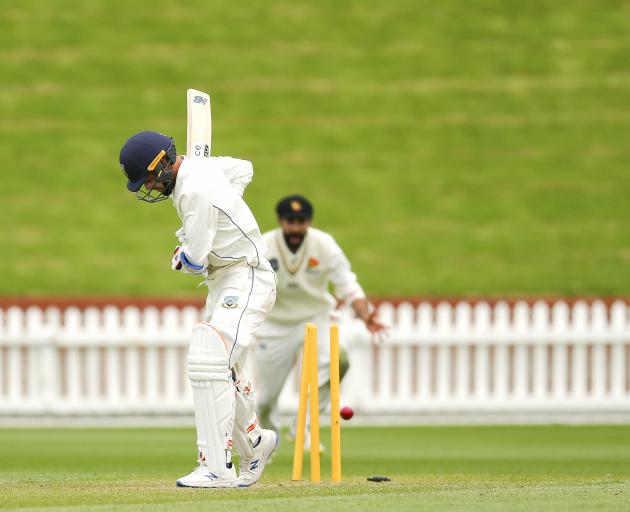 Otago batsman Michael Rippon is bowled by Wellington seamer Nathan Smith during his side’s second innings in the Plunket Shield match at the Basin Reserve yesterday. Wellington wicketkeeper Tom Blundell looks on. PHOTO: GETTY IMAGES
Who would be a top-order batsman in October?

Otago slumped to six for 74 on Saturday’s opening day of the Plunket Shield but battled back to post 207 against Wellington at the Basin Reserve.

Seamer Travis Muller continued the fightback with a career-best haul of six for 52.

He struck a double blow early yesterday morning which plunged Wellington into a slow nose-dive.

The Firebirds were bowled out for 195 and ended up conceding a small first-innings deficit of 12 runs.

Volts captain Hamish Rutherford set about building on the lead. He stroked a half century but calamity struck again.

The visiting side crashed from 94 for one to 143 for seven when bad light stopped play.

Rutherford was out shortly before the stoppage for 77.

The Volts lead by 155 runs with three wickets in hand and two days to play.

Former Otago all-rounder player Nathan Smith has nabbed six wickets in his debut for Wellington and shapes as a threat today.

Wellington showed some early resistance with the bat, reaching 91 for two at stumps on day one.

But Muller nicked out Michael Bracewell for 30 and trapped the dangerous Tom Blundell lbw for a golden duck early yesterday morning.

Wellington’s prospects of building a healthy first innings really went south when Troy Johnson threw away his wicket with, well, the technical term is a dirty swipe.

The 24-year-old was on 78 and was closing in on a second first-class hundred before mistiming a pull shot and holing out.

Muller barrelled through the rest of the line-up, starting with Smith who featured an edge.

Newton chopped on to make if five for Muller and Michael Snedden got a thick edge.

But the opening morning of the season could not have gone much worse for Otago.

The Volts were put into bat on a lively surface and were 83 for six by lunch.

Smith (three for 60) picked up the prized wicket of Rutherford for two with just his second ball for his new team.

Dale Phillips perished lbw for a duck in the next over.

Nick Kelly (16) and Mitchell Renwick (20) both got starts but had to trudge off with less reward than they would have wanted.

Kelly received a fine ball from Ian McPeake which nipped back and bowled him.

But Anaru Kitchen (23) and Michael Rippon (9) engineered their on demise.

The Volts lower order added some valuable runs to get the side past 200.

Muller top-scored with 30, while Max Chu, Jake Gibson and Jacob Duffy chipped in with 20-odd each.

- The second-round Plunket Shield match between Wellington and Northern Districts at the Basin Reserve beginning on October 31 will be rescheduled for later in the season due to Covid-19 travel restrictions on players in Waikato.

The Firebirds will host Canterbury at the Basin Reserve instead.