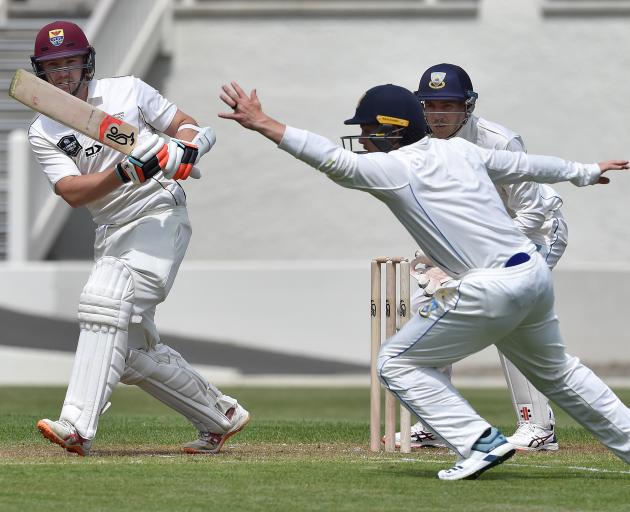 Northern Districts opening batsman Henry Cooper plays a shot as Otago’s Nick Kelly reaches for the ball in hope during the first day of the Plunket Shield match at the University of Otago Oval in Dunedin yesterday. The Otago wicketkeeper is Mitch Renwick. Cooper made 149. PHOTO: GREGOR RICHARDSON
Northern Districts opener Henry Cooper rode his luck to post a big century and drag his side through to 243.

Then Neil Wagner pounced. The Black Caps left-armer - and former Otago man - struck twice to reduce Otago to 29 for two at stumps on day one of the side's Plunket Shield match at the University of Otago Oval yesterday.

The game is probably still evenly poised but Otago squandered opportunities to put its opponent under more pressure.

The Volts made a dreadful start in the field. They shelved three catches in the opening half hour.

Henry ``four-lives'' Cooper was the biggest beneficiary. He was dropped for nought in the second over of the day.

Nathan Smith got the edge but first slip Hamish Rutherford bobbled a simple one and could not regather it before he toppled backwards.

Wicketkeeper Mitchell Renwick grassed a tougher chance from the bat of Daniel Flynn next. It was low to his left but very catchable when you have the gloves.

Ironically, the breakthrough came from the third dropped catch of the day. Cooper hit a low drive straight back to the bowler, Jacob Duffy.

It was at about shin height and Duffy did well to get down and get two hands on it. But it eluded his grasp only to cannon on to the stumps.

Flynn, who is playing his 100th first-class game for Northern Districts, was well short of his ground. It was rookie mistake from an experienced player.

Cooper had his third life on 26. Rutherford was the culprit again.

The fielding did get better, though. Dale Phillips grabbed one close in under the helmet to account for Bharat Popli, and Dean Foxcroft dived forward to take a brilliant pouch at midwicket to removed the dangerous Dean Brownlie before he could get under way.

Cooper was beginning to flourish, though, and would go on to bring up his third first-class hundred.

He reached the milestone with a six down the ground off Foxcroft.

But Otago nabbed two quick breakthroughs after the lunch break, including capturing the scalp of BJ Watling for four.

When Joe Walker feathered an edge, Northern was teetering at 141 for six.

Cooper and Brett Randell (18) teamed up in a valuable 60-run stand to help steer the visitors past 200.

Cooper was dropped again on 142 but eventually ran out of luck on 149 having score more than 60% of his side's runs.

Rippon was the pick of the Otago bowlers with four for 60. There was a few too many full tosses but he was threatening when he hit a good length.

In the other shield matches, Auckland fast bowler Lockie Ferguson took four for 23 to help dismiss Wellington for 91 at the Basin Reserve.

Central Districts slumped to 164 all out at Saxton Oval.

Canterbury's Fraser Sheat did most of the damage with four for 52 but the visitors are finding batting difficult as well. They are 133 for four.