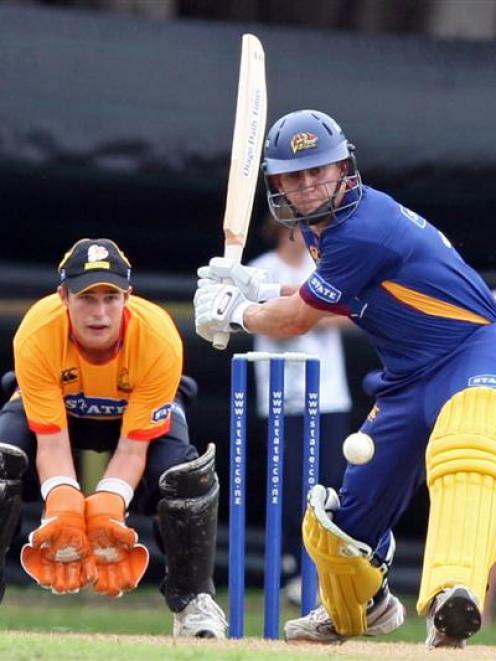 Of course, Otago will not see it that way. The dramatic one-wicket loss, and Canterbury's narrow five-run win over Northern Districts, means the Volts will have to travel to Christchurch to play in the semifinal on Wednesday.

For the bulk of Franklin's undefeated innings of 87, it looked as though the gangly left hander was digging an enormous hole for his side from which there was no escape.

In reply to Otago's 244, Wellington was struggling at 123 for six. Mindful of the team situation, Franklin took his time to get set and meandered his way to 50 off a ponderous 77 balls in 1hr 38min.

But having kept his side within striking distance, he cashed in on the batting power play, whacking two fours and six off the 46th over to swing the momentum back to the visitors.

With one ball remaining, the scores were tied but Franklin found a gap in the on side to win the match.

Otago coach Mike Hesson praised Franklin's efforts but believes his side did not set Wellington enough runs to chase.

"I think from 35 overs on we didn't play very sensibly," he said.

It is not all doom and gloom. Otago beat Canterbury in Christchurch in the semifinal last year and went on to win the final.

"We're gutted we're not at home because we wanted to play in front of our fans. But we've won in Christchurch before and we'll certainly be preparing to do the same."

Hesson was coy on whether Brendon McCullum might have made a difference in the match and preferred to emphasise how well his replacement, Aaron Redmond, played.

The world-class wicketkeeper-batsman was released to play for New South Wales in the Australian twenty/20 final.

Redmond scored a classy 46 from 59 deliveries and walloped a massive six on to the roof of the Queens Park Pavilion.

The former New Zealand test opener has been a revelation at No 4 this season and stroked five boundaries and six on his way to a masterful 54 off 50 balls. It took a piece of brilliance from Jeetan Patel to prise him out. Fielding at point, he dived and intercepted the ball centimetres above the grass in a triumphant outstretched right hand.

The New Zealand off-spinner took two for 41 from his allotment of 10 overs, including removing the dangerous Dimitri Mascarenhas.

The game was set up nicely for the big-hitter to do what he does best and send the ball to and over the rope. But, before he could get established at the crease, Patel lured him into a slog sweep and trapped him in front for four.

A healthy crowd of about 700 groaned collectively in disappointment. With fellow hard-hitters McCullum and Jesse Ryder both missing, the spectators were looking forward to seeing the all-rounder strut his stuff. Warren McSkimming and Ian Butler could not get going either as Otago faltered, losing its last four wickets for 34 runs.

Neil Broom was the last Otago batsman dismissed. He skied a pull shot but not before he had added 77 from 81 balls, which included five fours and two sixes.

He brought up his half century in imperious style, stepping to leg and carving a shot over extra cover for six.

Wellington worked its way into a healthy position with BJ Crook, who hit a run-a-ball half century, and Matthew Bell combining for a 76-run stand for the second wicket. But in a superb six-over spell, McSkimming took three for 15 from 10 overs.

Neil Wagner picked up four wickets and bowled well at the death, almost turning the game when he picked up two late scalps