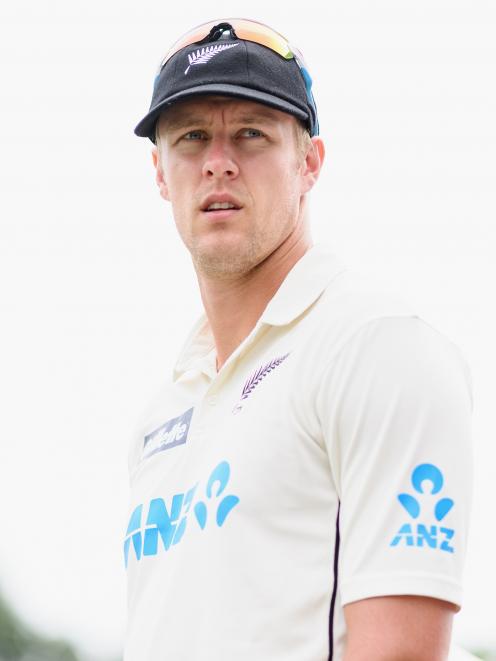 Kyle Jamieson has made a blockbuster start to his international career. Photo: Getty Images
How will we cope?

Towering Black Caps seamer Kyle Jamieson is unlikely to be spotted on a cricket field for at least a week.

The 26-year-old will join the rest of the Black Caps test seamers and have a spell on the sidelines.

The 2.03m-tall right-armer has certainly earned a break.

He produced a staggering performance in the second test against Pakistan.

Not many can cast shade on Kane Williamson, who helped set up the win with his second double century this summer and would have otherwise collected the award. But then Jamieson is far from your ordinary player.

In just six tests the Aucklander has nabbed 36 wickets at an average of 13.27.

It is the kind of statistic unheard of since the 1800s. He has also made a pretty decent start with the bat.

It is a remarkable trajectory which will certainly flatten out. But in the meantime he is the talk of the cricketing world.

Even his brief absence from the limelight will not stop the chat.

He was pretty much the only topic of discussion during a press conference with Black Caps coach Gary Stead yesterday.

Stead got his first sight of the promising pace bowler when he moved south from Auckland to Lincoln on a cricketing scholarship when he was still a teenager.

Dayle Hadlee had talented-spotted the youngster .

His height was always going to be a "point of difference", Stead said.

But Jamieson netted none for 97 in his first-class debut and one for 85 in his next four-dayer, so he certainly was not an immediate success.

He toiled initially and had some injury concerns. But he burst through the cloak of silence that surrounds domestic cricket with an astonishing six for seven in a T20 match against Canterbury on New Year’s Day, 2019.

Everything he has touched since has turned golden.

"Every step that Kyle has taken so far has been great to watch and we are really, really pleased with the way he’s developed," Stead said.

"I think the thing that impresses me the most is not necessarily the on-field stuff but the way he’s got ready — the way he is searching to get better every day.

"And when you have those attributes and I guess you also have the attributes he has physically, you put them together and you’ve got a pretty exciting cricketer."

If Jamieson can stay fit he is set for a glittering international career.

Stead believes the young man has the hunger and attitude to back up his obvious physical attributes.

"He is never really satisfied with one performance. He is always looking to try and get better as well."

Managing his rise to stardom should not be a problem. The game and your team-mates have a way of keeping you grounded.

"Who knows — the world could be his oyster with what is ahead. But at the end of the day he is still just a cricketer and he is just one of our boys when he gets together with us."

Meanwhile, Black Caps all-rounder Colin de Grandhomme’s stress fracture in his right foot is progressing well and he is on track for a return to play mid-month. He is likely to be restricted to playing as a specialist batsmen initially.

He has only just started back bowling recently, while fast bowler Lockie Ferguson has an important scan coming up and Stead said they would have more of an idea once those results were in.

He has been sidelined with a stress fracture in his back.