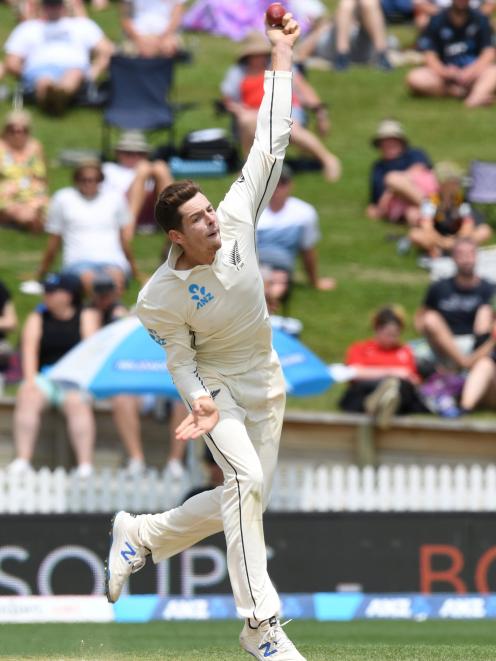 You can count on that, boys and girls.

But will Santner deliver?

Mitchell Santner has retained his spot in the Black Caps test line-up.

The left-arm spinner has been named in a 13-strong squad for the series against Pakistan which gets under way at Mount Maunganui on Boxing Day.

Black Caps captain Kane Williamson returns to the test line-up after skipping the second test for the birth of his first child.

Prolific Wellington left-hander Devon Conway drops out of the squad to make room for Williamson.

It is a predictable squad with just the one real talking point — how did Santner manage to keep his spot when there was a much better option available?

Fellow left-armer Ajaz Patel missed the test series against the West Indies while he was recovering from a calf injury.

He is fit, available and a superior
bowler. In eight tests he has nabbed 22 wickets at an average of 33.31, including a couple of five-wicket bags.

It is a record which compares very favourably to Santner’s returns at the top level. He has taken 39 wickets at an average of 44.71 in 22 tests.

But it is Santner’s batting skills which have got him the nod. If he plays in the opening test, it would be place of all-rounder Daryl Mitchell, coach Gary Stead said.

"The toughest squad selection was clearly around the spinner," Stead outlined.

"That basically came down to the balance of the side.

"With the four-strong pace attack going so nicely, we wanted to have a spinning all-rounder as an option for that No7 position.

"It’s really unfortunate for Ajaz, who has overcome his calf injury. But the all-round ability of Mitchell Santner is our preferred option for this series.

"The fact Ajaz hasn’t been able to have any game-time in the lead-up was also a concern for the selectors."

It appears Patel’s only way back into the test line-up is if New Zealand plays on a Bunsen burner, the Black Caps lose faith in a four-pronged pace attack or Kyle Jamieson can convince the selectors he is genuine threat with the bat at test level and cement himself as an all-rounder.

Santner, meanwhile, is a kind of default option the side leans on when it needs the comfort of a slower bowler who bats a little.

The Black Caps are chasing a spot in the inaugural ICC World Test Championship (WTC) final.

A series sweep against Pakistan and a heavy defeat for India in Australia would leave the Black Caps well-placed to make the final which will be staged at Lord’s.

"We’ve got a very settled and experienced group of players who have done the job in our conditions for a long time, so I know they’ll just be focusing on the task at hand rather than worrying about too much down the line," Stead said.