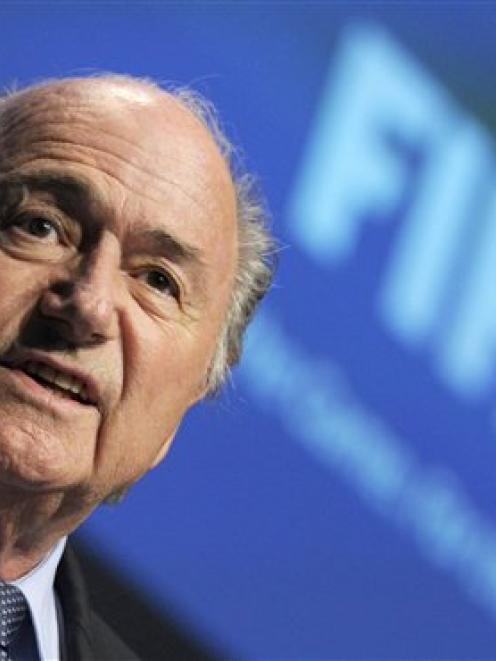 Sepp Blatter. Photo AP
FIFA President Sepp Blatter says his next term will be his last if he is re-elected in June.

Blatter is running for his fourth term but is facing the challenge of Qatar's Mohamed bin Hammam in the election to be held in Zurich, Switzerland.

"You know very well that I will aspire to another four years, those will be the last four years I aspire to," Blatter said at the UEFA Congress at Paris' Grand Palais.

Blatter has been running football's world governing body since 1998 and is facing his first challenge since Issa Hayatou took him on in 2002.

"We are in extra time," said Blatter, referring to the time remaining before the election. "Let's wait and see what the outcome will be."

While Bin Hammam has promised greater transparency if he ends his rival's 13-year reign, Blatter told the UEFA delegates that football's main challenges in the coming years will be to preserve the identity of clubs and to fight against illegal betting and doping.

"Football is corrupted by all little devils which exist in the world," the 75-year-old Blatter said. "Don't forget that football is a game and that when one is playing, he always tries to cheat a little bit. Together we have the task of bringing together the adventure we have started. We want to ensure a better future for our youth."

Blatter added that FIFA will have a "zero tolerance" policy in the fight against corruption after several FIFA officials were suspended for seeking bribes during the 2018 and 2022 World Cup bids.

UEFA members make up more than one quarter of the maximum 208 FIFA voters that Blatter and bin Hammam will attempt to woo before the June 1 election.

The winner needs a two-thirds majority of valid votes cast in the first ballot, or a majority in the second. FIFA has set an April 1 deadline for other candidates to be nominated by a single member federation.

Bin Hammam said on Monday that he had offered a deal to UEFA president Michel Platini for European support to help him oust Blatter.

Platini, the former France captain who won another term as UEFA president on Tuesday, said in January he would not run for the FIFA presidency while promising UEFA members he would serve them for four more years.

"It's a good thing that we have two candidates bidding, it should help democracy progress," Platini said about the FIFA race. "Both candidates will probably come up with new ideas."

Asked which candidate he would support, Platini said that as UEFA president he was not allowed to give his personal opinion on the matter.

"I'm going to meet with associations, (UEFA) vice-presidents, countries and we will together decide which stance we will adopt regarding the candidates," Platini told a news conference. "I can't speak in my name anymore and I have to listen to all opinions before we have an official stance."

Platini also dodged a question about whether he would be interested in taking over at FIFA presidency in four years.

"Let's meet again in three years and I will tell you," Platini said.