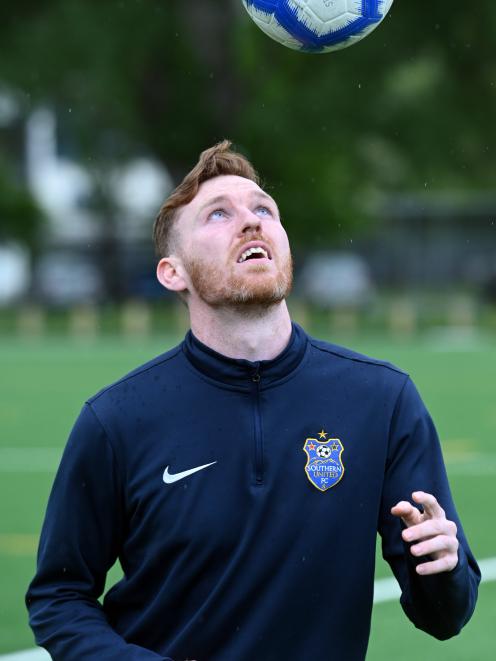 Danny Ledwith practises at Logan Park this week as he prepares for Southern United’s match against Eastern Suburbs. PHOTO: LINDA ROBERTSON
There was a little extra significance to Danny Ledwith's latest milestone.

When he brought up 50 matches for Southern United two weeks ago, it was a mark of commitment many had questioned at the outset.

The midfielder celebrated with one of the team's best performances in his four seasons - a 4-0 drubbing of Tasman United in its national football premiership opener.

There was plenty of criticism when he arrived along with four other Irishmen in 2016, but his intention had always been to stay on.

However, there was scepticism as to whether they would last more than one season.

Of that initial group, Conor O'Keeffe and Stephen Last also remain - both have also played 50 matches and been influential for the club.

They will add to that at Logan Park against Eastern Suburbs today.

"I think a lot of people probably expected us to go home after the first season," Ledwith (28) said.

"We finished 10th, made some progress points-wise, but when you finish 10th you don't want to think about any progress, to be honest.

"It was the case from day one that we were here for the long haul.

"As soon as we came we saw it was a sleeping giant. Paul [O'Reilly] was putting lots of good things in place."

The trio also work as development officers for Football South and has been an equally important reason for staying.

While some of the criticism had been difficult to take at first, he had learned to deal with it.

"Football's a game of opinions and people are completely entitled to their opinions.

"I just try to laugh it off at this stage.

"If people still genuinely think we're not bringing something to the region and we're not doing anything to make it better, that's their opinion, but I'd respectfully disagree."

He felt the club had made significant progress.

This year's team was exciting, the development pathways were clearer and the entire set-up was much-improved.

He does not have plans to leave either and is hoping to obtain residency.

Family and people were the big things he missed about home.

However, the life he had in Dunedin was something of a "dream".

"My father often says to me, `don't you dare think of coming home'. He knows I'm in a role I love.

"If I was to go home, who knows what could happen?

"So he said `keep doing that', because he knows I'm doing something I'm passionate about.

"A lot of people are not lucky enough to do that, so I count my blessings everyday."

Southern will look to bounce back from a 2-1 loss to Canterbury United today.

Ledwith said the team had trained well and put that result behind it.

He was expecting a tough match from a Suburbs side which played attractive football in a 1-0 win over Canterbury, although it was beaten by Hamilton Wanderers last week.