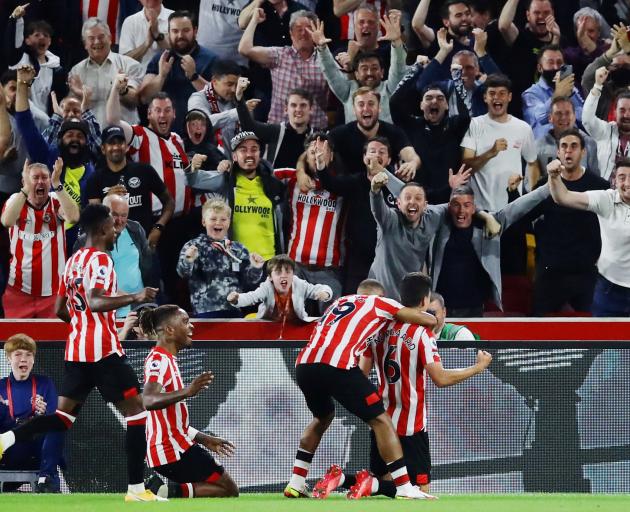 Brentford fans and players celebrate their second goal against Arsenal to kick off their first top flight campaign since 1947. Photo: Reuters
What was once such a normal sight in so many towns and cities up and down the country seemed like a some sort of time warp on Friday as fans clad in their club colours gathered to watch Brentford kick off the Premier League season against Arsenal.

Given that it was the west London club's first appearance in the top flight since 1947, it was always going to be a special night but there was so much more to celebrate - not least what turned out to be a hugely impressive 2-0 victory for Brentford.

After the lifting of Covid-19 restrictions, it was the first time since March 2020 that clubs could fill their stadiums and for Brentford fans that meant a first chance to watch their team in their superb new 17,500-capacity home a mile from their old Griffin Park venue.

The ground, built on the site of a scruffy industrial estate most famous to locals as a cut-through to the M4, is shared with Premiership rugby club London Irish and it becomes the 60th stadium to host a Premier League game. Brentford are the 50th team to play in the Premier League since it was formed in 1992.

Almost every one of the fans in it – bar the few hundred Arsenal supporters squeezed into a corner - gave full-throated rendition of their adapted Beatles anthem, with the “Hey Jude” chorus replaced by “Brentford” and the stage was set.

Their illustrious opponents are the team with the longest unbroken presence in the top flight - they've been there since 1919 - but while Brentford are unquestionably on the up, Arsenal are struggling.

They finished eighth last season, as they did the previous year, and they haven’t made the top four since 2016 and this is the first time for 26 years they are not involved in any European competition.

Manager Mikel Arteta was apoplectic for much of the match, his mood no doubt soured by the absence of Pierre-Emerick Aubameyang and Alexandre Lacazette. "They felt unwell, that's all I can say,” the Spaniard said.

But this was Brentford's night, and their coach Thomas Frank enjoyed every moment of it.

"I think we top-performed but there must be a level above that," he said. "That was more than a 10/10 performance in terms of atmosphere.

"If there was only one man of the match, it's the fans. They were amazing. I'm a bit speechless. First time in the top-flight, we're opening the Premier League season, fans can dream we're number one in the Premier League. It's a fantastic story.

"We're just a bus stop in Hounslow, we're not supposed to be here. We will celebrate every win, but we want more."