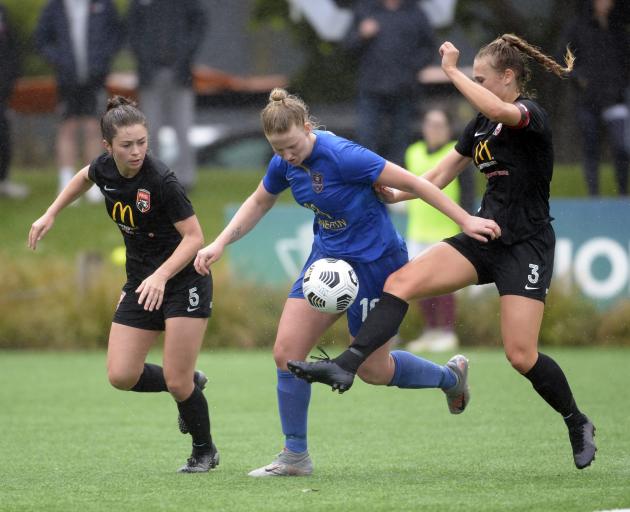 Southern United forward Amy Hislop looks to control the ball as Canterbury United defenders Mikaela Hunt (left) and Rebecca Lake try to stop her during the game at the Logan Park turf earlier this month. PHOTO: GERARD O'BRIEN
Southern United’s dominance this season has been further reflected on a national stage.

Five players from the South Central Series champion team have made the team of the season.

Striker Amy Hislop was picked up front, having netted three goals, plus being the last Southern player to touch an own goal, across the six-game season.

The former Queenstown player, now with Otago University, was a constant threat and created plenty of chances for herself.

In the midfield, captain Rose Morton and Chelsea Whittaker both filled spots.

Morton was solid all season, barely making a mistake in central midfield and setting up several opportunities.

Whittaker was shifted out wider this season and thrived in the extra space.

She regularly made dangerous runs up the left wing, while scoring a hat-trick in the last game to help Southern clinch the title.

At the back, Toni Power and Hannah Mackay-Wright rounded out Southern’s representation.

Power filled the right back spot, having shown her quality both as a playmaker up the right wing and in keeping attackers out on defence.

Mackay-Wright fills one of the centre back roles.

The national age-grade representative was a key part in Southern’s ability to withstand pressure, while also coming up with several significant intercepts in the final game.

She was joined by Annalie Longo in a No 10 role, as well Rebecca Lake in the other centre back spot.