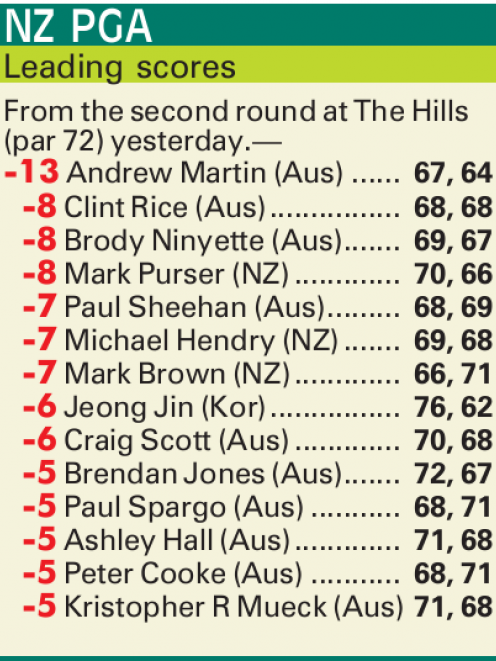 Upsets and surprises came from the PGA Championship leaderboard yesterday as 62 of the tournament's professionals tore through to make the final cut, but it was Australian Andrew Martin who finished clear in front.

Martin started the back nine with five birdies from six holes and his afternoon round flowed as the 27-year-old ended up with 8 birdies and 10 pars to finish eight under par for the day and 13 under in total.

This gave the Victorian a giant five-shot lead in front of fellow Australians Clint Rice, Brody Ninyette and New Zealand's Mark Purser, all on eight under par.

Coming off his last hole, Martin, who was playing with a blister on his right foot, said the combination of Thursday and yesterday's play had set him up for a comfortable weekend.

"I got off to a pretty good start, a bit like yesterday. I think I hit a bit better today.

"Before I knew it, I was 10 under, so I was pretty happy with how I was doing with my game plan to get to that.

"Eight under par, I'll take that.

While Martin enjoyed the perfect round, his fellow Australian hopefuls Peter O'Malley and Craig Parry dipped out early, along with New Zealand's picks, Josh Geary and Phil Tataurangi.

Day one leader Mark Brown finished seven-under, which means he, Purser and Michael Hendry finish in the top 10 for New Zealand leading into day three.

Typically Kiwi, Purser said there was no such thing as the perfect game of golf.

"Started hitting a series of really good iron shots and made the odd putt and missed a few putts as well, but you can't be perfect out there, can you?

"One shot at a time; don't try to be perfect, you can't hit good shots all of the time. You have a few bad holes or a few bad shots. That's just golf.

"You can't worry too much.

"That's been my mindset when I've been playing and it seems to be working."

In contention for what would be the biggest prize of his career so far, the Aucklander sounded relaxed about what lay ahead of him for the weekend.

"The conditions out there are just perfect, aren't they. There's no wind and the birds are chirping and the worms are crawling and all that kind of stuff.

"I'm pretty relaxed about it all. They [the amateurs] are probably a bit nervous teeing up. We've played in front of a few more people than they have."

Meanwhile, the amateur field at Jack's Point spilled a generous amount of shots, with only world amateur No1 Lydia Ko going under par at four under.

Her partner for the afternoon, prime Minister John Key, would have been happy to equal Hollywood star Don Cheadle's score of 93, 21 over par.

Three-time PGA champion Sir Bob Charles was paired with one-time champion Bob Glading, both scoring totals under their ages with 75 and 89 respectively.