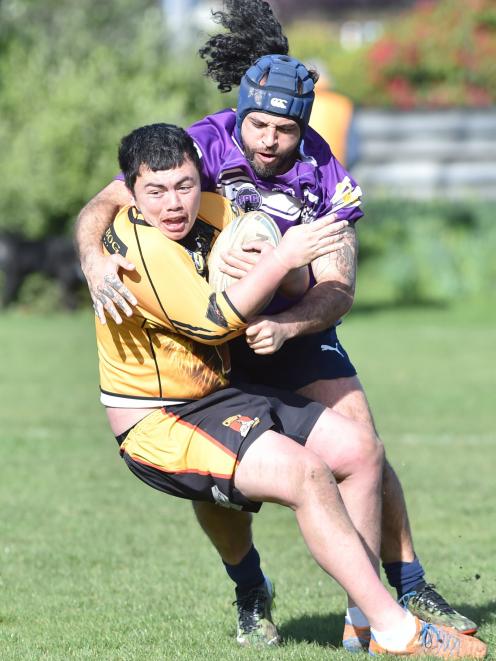 Kia Toa Tigers player Aiden Muraahi tries to escape the clutches of South Pacific Raiders defender Joel Taniora at the Kensington Oval on Saturday.
University and Ponsonby eased into top form in the latest round of the Otago competition.

The Kia Toa Tigers also showed promise in their 42-26 win over the South Pacific Raiders on Saturday.

University hit top gear in a 59-0 win over the Waitaki Warriors at the Kensington Oval.

The students have shown plenty of grit in recent weeks but were able to unleash their attacking weapons against the Warriors, who tried hard but could find no gaps in the defence.

Waitaki had earlier produced a spirited effort in a 32-6 loss to guest club Ponsonby.

The Warriors held their own for much of the first half, hammering away at the Ponsonby line without much luck. 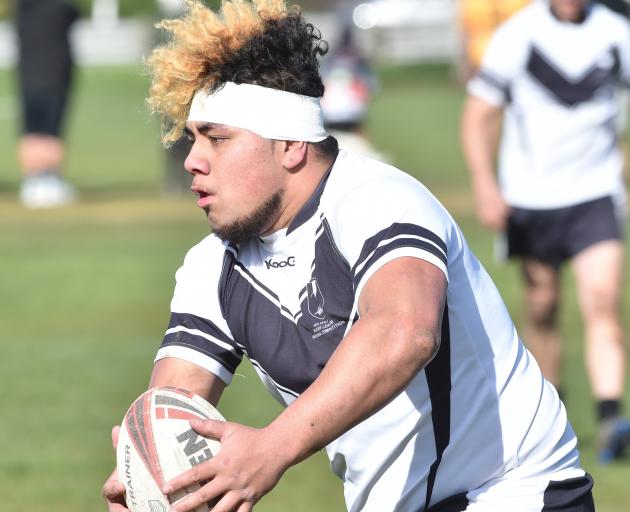 Isaia Fariu in action for the Waitaki Warriors. PHOTOS: GREGOR RICHARDSON
With the pressure building, Ponies captain Mike Williams took the game into his own hands in the second half, breaking away for three tries on the edge.

Ponsonby found its rhythm in the final 10 minutes, and took the game out of sight with a try to hooker Sonny Foliola.

The Aucklanders were left feeling relieved their unbeaten streak was alive, while Waitaki showed improvement again.

Ponsonby backed up with a 34-6 win over South Pacific.

With both sides carrying injuries, the game became a battle of wills.

The Raiders showed more energy in the opening exchanges, repeatedly threatening the Ponsonby line, but again strong defence kept them at bay.

Front rower Lorenzo Reuelu opened the Ponsonby scoring, after playing 70 straight minutes across both games, and the Ponies led 14-0 at halftime.

South Pacific showed plenty of energy going forward and threatened a famous comeback, but the Ponies rallied and pulled away with some late tries.

The final score flattered Ponsonby, and set up an anticipated rematch in round five.