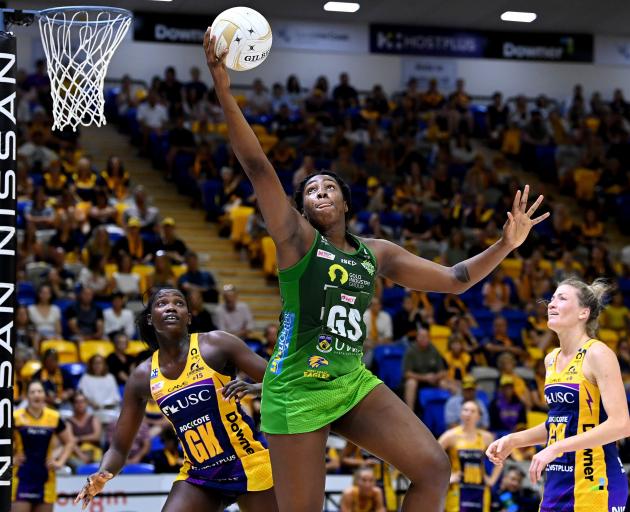 West Coast Fever goal shooter Jhaniele Fowler hauls the ball in as Sunshine Coast Lightning defenders Phumza Maweni and Karla Pretorious watch during their semifinal on the Sunshine Coast on Sunday. PHOTO: GETTY IMAGES
Maybe we did not appreciate just how good the Southern Steel had it for all those years.

Jhaniele Fowler turned in her share of dominant performances in a blue dress.

Now she is wearing green — and one game from completing one of the single most dominant seasons in netball history.

The Jamaican goal shooter was near-perfect as she powered her West Coast Fever into Australia’s Super Netball grand final.

The Fever will now meet the Melbourne Vixens on Sunday.

It was hardly an outlier though.

The 1.98m shooter has made an almost unfathomable 910 goals from 967 attempts.

She has also nabbed 66 offensive rebounds, finishing most of her misses on the second opportunity.

Fellow Jamaican Romelda Aiken has made the next-most shots with 583.

South African Lenize Potgieter, who played for the Steel in 2019, finished fifth with 437 goals from 467 attempts.

Fowler is in her third year with the Fever.

That same season the team went unbeaten in the inaugural ANZ Premiership.

She was similarly dominant for the team in the now defunct transtasman league.