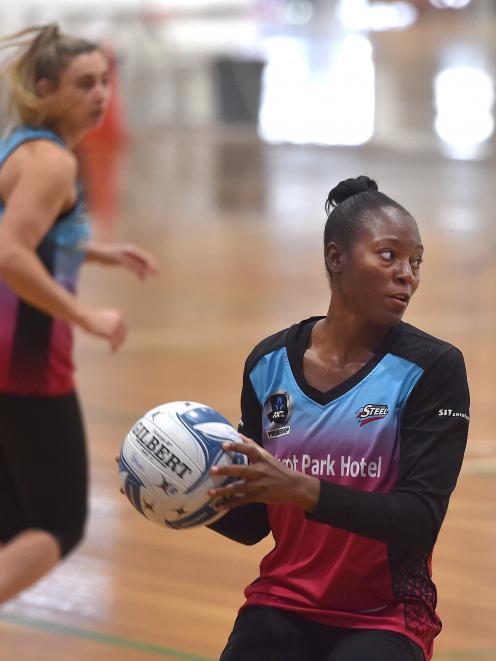 Steel shooter Kalifa McCollin searches for someone to pass to during a training session at the Edgar Centre this week. Midcourter Gina Crampton watches on from further back up the court. PHOTO: GREGOR RICHARDSON
Plenty of players get to scribble their autograph on a netball.

But very few get one named after them.

Kalifa McCollin can put a tick in both boxes.

The new Steel recruit is a brand ambassador for Gilbert Netball and as such has her own signature ball.

It features bright splashes of colour, her name and her motto ‘‘Netball is art and the court is my canvas".

It is a lot or pressure to live up to. And add into the mix the fact the 24-year-old Trinidad and Tobago international will have to shoulder a heavy burden down the attack end for the Steel this season.

In a way, the goal attack is replacing two players. Long-serving shooter Te Paea Selby-Rickit has transferred to the Tactix, and South African import Lenize Potgieter has moved on after one season.

McCollin, though, seems relaxed with the pressure. While replacing the likes of Selby-Rickit is a challenge, she is confident in her own ability.

"I bring my own style and my own strengths and it is about being the right fit for the team and being able to gel with them," McCollin said.

That said, it is a major restructure. Feeding a player like McCollin, who is on the short side for a shooter at 1.8m, brings new challenges.

But the Steel should be able to adjust. The franchise has an experienced midcourt duo in Silver Ferns Gina Crampton and Shannon Saunders.

Their ability will be a comfort to McCollin as she adjusts to the demands of the ANZ Premiership.

‘‘They’re very experienced players and they are quite helpful. And I think we’ve been doing quite well and are set to peak at the right time."

That right time is nearing. The Steel opens its campaign against the Magic in Dunedin on Monday.

The Magic recorded a 57-47 win against the Steel in a recent pre-season match.

Coach Reinga Bloxham has warned supporters it may take some time before her side finds its rhythm. She went as far as saying the first three games could be quite a challenge.

But that short-term pain maybe worth it in the long run. You do not get your name on a netball unless you can play a bit and McCollin can play a bit.

It is her accuracy and ability to create play that Bloxham hopes will serve the franchise well.

McCollin arrives with an impressive resume. She has spent the past three seasons playing in the Super League in the United Kingdom— two of them for the Celtic Dragons.

In her most recent season, she was named as the league’s best attacking player and player of the season for the Celtic Dragons.

She has been to two World Cups with Trinidad and Tobago as well. But some of her proudest achievements are still to come perhaps.

She grew up in a netballing family. Her mother, Althea, is the national under-21 coach and her father, Heston, captained the men’s national team during his playing days.

Unsurprisingly she played her first netball match as a 6-year-old and her background has inspired her to give back to the sport.

She has a level two coaching qualification and is keen to chase a level three certification.

"As a youngster in Trinidad and Tobago you hear a lot of people saying there is no opportunities in netball. But you know I think it was good for me to be able to come out here to show people that , ‘hey, you can actually do this sport and actually make something out of netball’."