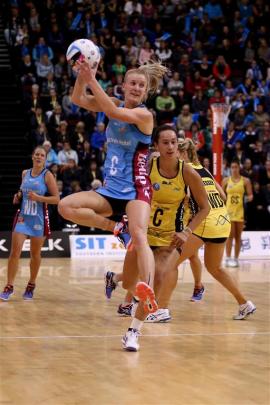 A huge defensive effort has powered the Southern Steel to its second emphatic win in as many weeks and ensured its unbeaten run in this year's ANZ Championship continues.

The southern franchise put away the Central Pulse 67-54 in Invercargill yesterday, to extend its unbeaten run to four matches and open up its lead at the top of the New Zealand conference to four points.

Steel coach Noeline Taurua called on her side to win more turnovers before last night's encounter and the home side duly delivered.

Goal keep Jane Watson led the way in an outstanding performance with a game-high seven intercepts, more than double the number the entire side managed against the Waikato-Bay of Plenty Magic in Rotorua last week.

In total, the Steel managed 11 intercepts and 13 deflections to lay the platform for the win in front of a typically vocal Stadium Southland crowd.

"But right throughout the court, everyone played well. We certainly got the gains we wanted tonight.''

Goal defence Storm Purvis was also instrumental in disrupting the Pulse attack during a messy first half, in which both sides were guilty of throwing some loose passes and producing some laboured movement through the court.

Watson claimed three clean intercepts and a deflection in the first quarter, while Purvis also made a nuisance of herself with two deflections, as the Steel shot out to an early 5-2 lead.

The game was tied at 9-9 after young Pulse goal shoot Maia Wilson got herself into the game with a long-range shot, but the Steel went on a six-goal run to take a 15-9 lead towards the end of the quarter.

Watson then snuffed out her third intercept of the quarter to help the home side extend its lead to 17-10, before the Pulse hit three unanswered goals to reduce the gap to four at the break.

The loose passing continued in the second quarter but the Steel was able to capitalise as it extended its lead to 22-16 through some impressive athleticism from Jhaniele Fowler-Reid under the hoop.

Yet another intercept from Watson was followed by a bit of luck for the home side as a loose pass bounced off the post and back into Steel hands.

But the Pulse did not lie down, making life difficult for the Steel play-makers and pulling the lead back to 27-26 towards the end of the half.

The Pulse had a chance to equalise but yet another turnover saw the opportunity lost and the Steel took a 30-27 lead into the break.

While Fowler-Reid was her usual reliable self in landing 17 from 19 in the first half, Te Paea Selby-Rickit did more than her fair share of work as she nailed 13 of 15 attempts and gave feeders Gina Crampton and Shannon Francois plenty of passing options.

She nailed four of the Steel's next five goals and had all but shared the points with Fowler-Reid when the lead was extended to 39-33.

There were more than a couple of passes aimed at Fowler-Reid which went astray but overall, the Steel began to take command of the game in the second half.

Wilson and Ameliaranne Wells shot well for the Pulse but the side did not have enough ball and was down 48-39 at the end of the third quarter.

The intercepts just kept coming from Watson and before long the gap was out to 60-47 as the Steel ran away with the match.

The first change for the Steel only came midway through the last quarter, when Purvis left the court for blood and was replaced by Te-Huinga Selby-Rickit.

But Taurua cleared the bench as the score continued to blow out, introducing Brooke Leaver for Te Paea Selby-Rickit and Stacey Peeters for Francois, as captain Wendy Frew moved to centre.

Crampton was again a go-to player for the Steel, collecting 37 of the 55 centre passes and contributing 19 goal assists and 38 feeds into the circle.

The Pulse was not helped by the performance of its captain Katrina Grant, who was not at her best after battling illness throughout the week.

She left the court at the end of the third quarter.

The Steel now has three wins and a draw from four matches as it prepares to take on Australian sides in the next two weeks.