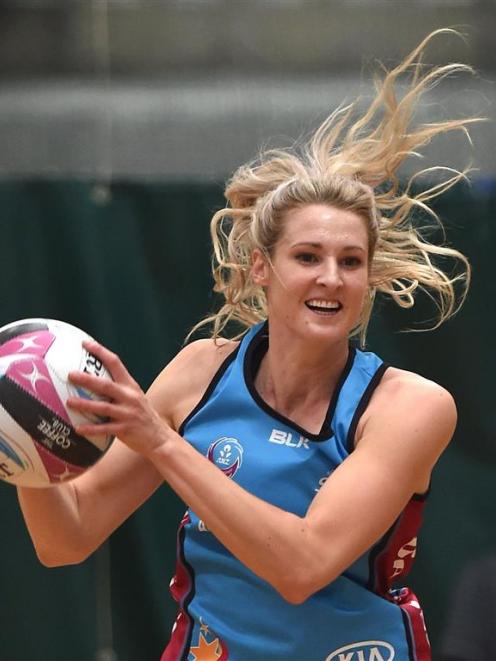 Steel defender Jane Watson trains at the Edgar Centre in Dunedin this week. Photo by Gregor Richardson.
Jane Watson did not expect to start last week's season opener against the Mystics, but she took the opportunity with both hands.

The 26-year-old defender played a blinder in the one-goal win and is a big reason why the Steel has a chance to improve to 2-0 when it hosts the Mainland Tactix in Invercargill tomorrow afternoon.

Watson, who started against the Mystics at goal keep alongside goal defence Storm Purvis, snaffled four intercepts and also finished with four deflections in her MVP award-winning performance.

"It was very unexpected but exciting and I guess I just need to take every opportunity as it comes,'' Watson said when asked about last week's game.

"It was interesting, because in training I have been playing a bit of wing defence, as well. But goal keep feels most comfortable.''

She said her team was "pretty stoked'' after scoring six consecutive goals in the final two and a-half minutes to stun the Mystics last Friday, but quickly switched its attention to its home-opener against the Tactix.

Watson, who is from Christchurch but went through secondary school at St Kevin's College in Oamaru, earned 30 caps for the Christchurch franchise between 2012-14.

After signing with the Steel last year, she made 10 appearances - eight from the bench - in last year's campaign.

The Steel trampled the Tactix in both last year's games, including the fixture in Christchurch, when the Steel scored an ANZ Championship record 84 goals.

Watson is again looking forward to playing against her former team, which still includes a bunch of players from her time with the team.

She is expected to earn another start at goal keep, unless coach Noeline Taurua springs another surprise and rotates Watson with Te Huinga Reo Selby-Rickit or rookie Abby Erwood.

Mainland has been dismal since 2010, notching an ugly 8-71 record and finishing dead last five of the past six seasons.

But while the Tactix were beaten by 15 goals by the defending champion Queensland Firebirds in Brisbane last weekend, they did play well in patches, particularly at the attacking end.

Mwai Kumwenda was impressive, landing 37 of her 38 attempts.

Goal attack Bailey Mes only landed 18 of her 27 attempts, but the Silver Fern is still a genuine threat.

The Tactix have only beaten the Steel three times since the competition's inception in 2008, but two of the wins were in Invercargill, most recently in 2012.

A win in tomorrow's second match of the season will see the Steel pull to within one win of its entire win total last season.

● Netball South will play its first game of the newly launched national league after the Steel match in Invercargill tomorrow.

Coached by Lauren Piebenga, it will play Netball Northern at 6pm. The match will be televised live on Sky Sport.