The great Dame Valerie Adams has finished with a medal in her fifth Olympics but it was also a case of a new Kiwi star is born in Tokyo.

Dame Valerie claimed the bronze medal, a fantastic achievement at the age of 36. She screamed with delight after her last throw, another podium position confirmed.

"This means so much more than winning my gold medals," Adams told Sky Sport after the event, a reference to the birth of her two children since the 2016 Rio Olympics. 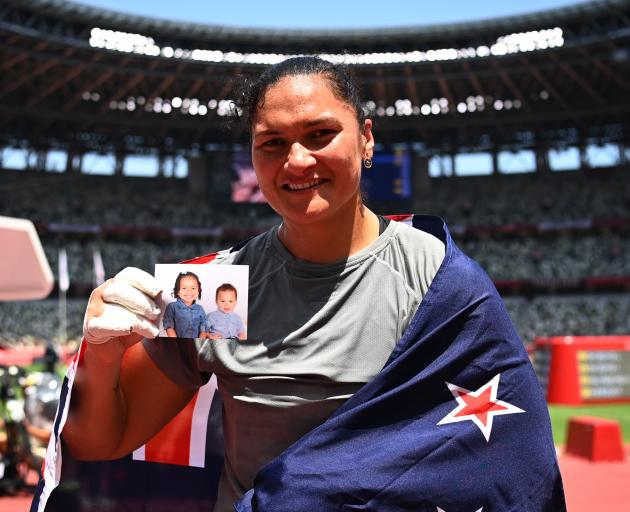 Dame Valerie with a photo of her children, daughter Kimoana and son Kepaleli. Photo: Reuters
Holding a photo of little Kimoana and Kepaleli, and holding back tears, she told Sky Sport: "I had two humans between Olympics and they inspired me – I keep imagining they are here."

Dame Valerie, draped in the Kiwi flag, talked about being away from her family for months, and praised the support she had received from her crew and Aotearoa. She particularly thanked coach Dale Stevenson.

It was China's screaming Lijiao Gong who set the pace and then stole the show, two massive personal bests leaving the chasers in her wake.

But the final also announced the arrival of a future Kiwi star in 22-year-old Maddison-Lee Wesche, the youngest finalist who threw a personal best 18.98m to finish sixth. That was an impressive 33cm more than the 18.65m personal best she recorded on Friday to qualify 11th for the 12-woman final. 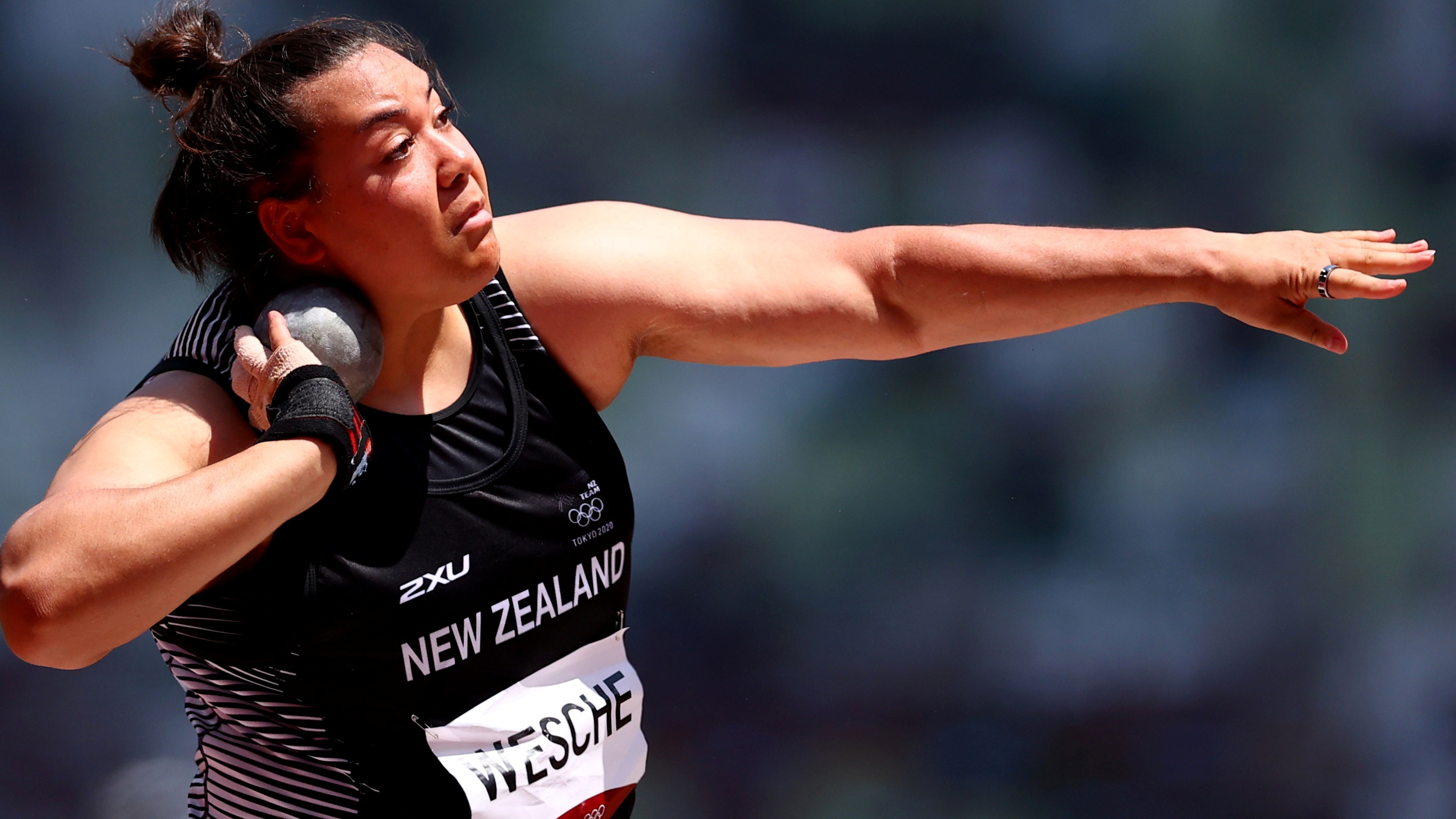 Maddison-Lee Wesche threw a personal best in the final. Photo: Reuters
"Keep her name in mind…she's going to follow in Dame Valerie's footsteps," the Olympic commentator reckoned, predicting Wesche was a star in the making.

"A remarkable competition for her…almost sneaking over that 19 metre mark."

But it was not just about the future.

The 36-year-old Dame Valerie - the oldest in the final by four years - was under pressure from the first round, with powerful initial efforts from Gong, American Raven Saunders and Portugal's Auriol Dongmo.

Calling on her extraordinary powers 17 years after her first Olympic appearance, when she placed seventh in Greece, Dame Valerie's second effort was good enough for the bronze position, lifting her above Dongmo.

Since her 2004 Olympic debut, Dame Valerie has claimed two golds and then a silver in Rio five years ago, when she was beaten by American Michelle Carter's fantastic personal best last throw.

She is the second New Zealander - Sir Mark Todd is the other - to win four medals across four different Olympics.

It was the fast-spinning, flamboyant Saunders who captured the attention in the Tokyo final, with her purple and green hair and scary, teeth-bared face mask.

Talking to wind herself up, her second put flew over 20 metres. Although it was a foul, it suggested she had the winning of the gold in her reach. She exceeded 20m again in the last round but it was another foul.

But she couldn't nail the super throw and Gong was the eventual star, deserving top prize with the five longest throws in the competition, with the best coming last.

The legendary Kiwi shot put star, who in her prime notched up 95 consecutive wins over seven years, went slightly further with her third, but not enough to overhaul Saunders.

Gong almost hit 20 metres with her third, but despite having the two best throws, the leaderboard was compact distance-wise. Gong prevailed to win gold with 20.58m, Saunders took silver with 19.79m, and Dame Valerie the bronze with 19.62m, her third throw.

Gong had two Olympic medals under the belt already, the first being bronze in 2012 when Nadzeya Astapchuk was disqualified for a positive drug test, which saw Adams belatedly awarded gold, and a Russian was also thrown out.