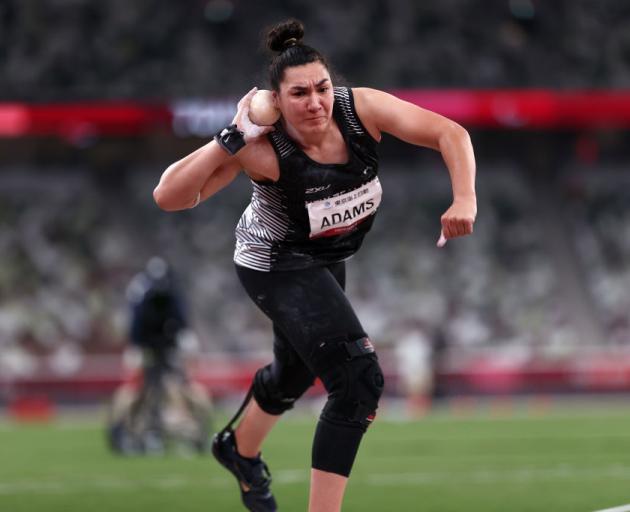 Adams threw a new Paralympic record of 15.12 metres beating her nearest rival Mi Na of China by nearly a metre and a half, with Na having a best throw of 13.69m.

All of Adams throws were good enough to win gold with her opening throw of 14.34m the lowest of her six efforts.

The 30-year-old said winning gold was a dream come true: "I'm very happy. It's a very euphoric feeling. Happy, relief, proud. Very emotional. It's unreal. It hasn't sunken in yet."

"I am in the best physical form I've been in, but I was having fun," said Lisa. "I was smiling, you know my coach told me to just go out here and enjoy it because we had done all the work, and that's what I did, I had a really fun time out there, it was so amazing. And the support from my coach and the crowd, and just our little crew that are allowed to be here, it was amazing."

Adams said it was an emotional and special moment as the stood on the podium while the New Zealand anthem played.

"Just reflecting over the last three years of work and choices, sacrifices, setbacks, growth, growth was a biggie. Just reflecting on all of that and just actually taking in that moment, we did this, the anthem's playing for us, and just thinking of how proud I am, how much I wanted to do this for me and my son. How special it's been to be on this journey with my sister, just all of it.

"During the playing of our anthem it was just reflecting, and I was so emotional about it, because it's been so special, so hard, so rewarding, but I felt very supported and loved you know, and I was really, really proud to do this for Aotearoa and our little team of five mil.

"It's cool, it's trippy to think that we're here doing the stuff we love during this pandemic, but I'm so grateful that we can do this here as safe as we can. It's mean, it's like a dream come true."

Adams only started shot put in 2018, winning her first world title in 2019 with a world record throw of 14.70m at the World Para Athletics Championships in Dubai.

She then surpassed that mark at the national track and field champs last year, throwing 15.28m.

Rotorua-based Adams will also look for a strong showing in the women's discus, where she will up against throwers in the F38 classification.

Fellow New Zealander Caitlin Dore finished eighth in the F37 shot put, with a best throw of 9.03 metres - a metre less than her personal best.

"I have mixed emotions about tonight's performance. Definitely not the outcomes that I wanted but I am excited and proud to be here.

"Five years ago I was at the Paralympic Games as a javelin thrower so to come back as a shot putter is a massive achievement. I obviously wanted more like every athlete does but it just wasn't my day.

"I will definitely come back fighting and hopefully in another three years I will be able to prove that I've got it," Dore said.

Also in action on the track was Paralympic debutant, sprinter Danielle Aitchison, who qualified for Sunday afternoon's 200m T36 final after finishing first in her heat.

After quitting team sport in 2016 due to the challenges from her hearing impairment, Aitchison was encouraged by her mum to attend several disability camps to re-engage her interest in sport.

Her love of sprinting was crystallised after she competed at the 2017 Halberg Disability Games.

Her focus paid off, with selection to represent New Zealand at the 2019 World Para Athletics Championships in Dubai.

"The plan was to get the best block start and then see where I was standing in the race. As soon as I was hit the 100m mark I saw there was no one else in front of me so I just cruised the rest of the race. I feel so happy to be in a Paralympic final.

"Now I just need to do the recover tonight to be ready to race the final tomorrow. So with a midday race tomorrow here in Japan I will now go and do a good warm down, eat, sleep and refuel in the morning."

Aitchison will compete in the final at 3.10pm NZT Sunday.