Wonderful but exhausting journey for Fairweather 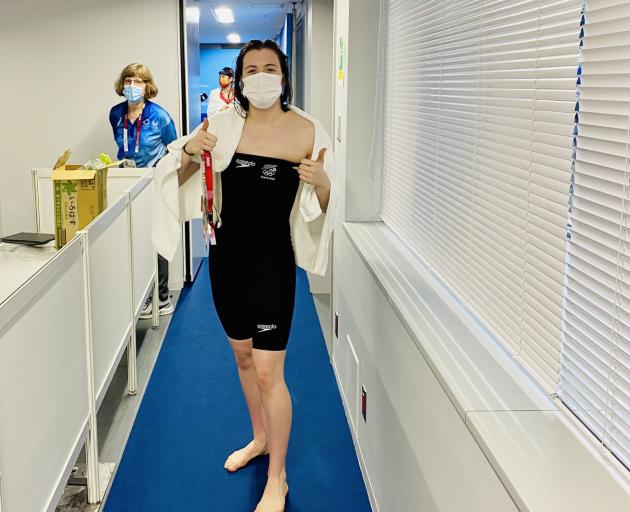 Dunedin swimmer Erika Fairweather heads for the media zone after her swim in the 200m freestyle semifinals yesterday. PHOTO: NZOC
Erika Fairweather started her Olympic campaign in lane eight and swam her way into a final with a stunning performance.

A day later, she swam in a blusteringly quick semifinal.

It was a pretty impressive couple of days for the 17-year-old Kavanagh College head girl at Tokyo Aquatics Centre.

She entered the Olympics ranked outside the top 20 in both the 400m and 200m freestyle.

But the Dunedin teenager produced a staggering swim in her 400m freestyle heat on Sunday night to make the final.

She carved 4sec off her personal best and broke Lauren Boyle’s national record with a time of 4min 2.28sec.

That allowed her to qualify fourth for the final but she was unable to reproduce that form in the gold medal race.

The next day she lowered her 200m freestyle personal best to qualify 14th for the semifinals.

She finished eighth in yesterday’s semifinal. That rounded out her individual campaign.

She will be back in the pool tonight when she joins Carina Doyle, Eve Thomas and Ali Galyer in the women’s 4x200m freestyle at 11.27pm.

It has been a wonderful but exhausting journey. She never expected to make it out of the heats in either event and that was patently obvious by the astonished look on her face after her epic swim in the 400m heat.

"I’m pretty tired. It has been a massive couple of days — two extra swims I wasn’t really expecting," she said shortly after yesterday’s semifinal won by Australian Ariarne Titmus.

Her schoolmates took a break from study to watch her swim in the 400m final on television on Monday afternoon.

There was not an unswollen tonsil in the school hall.

Fairweather finished eighth in the final but said the support she had received from home had been incredible.

"It is so, so special. You can feel the love from here. There is just nothing like it."

The 2019 world junior 200m freestyle champion will be just 20 in three years when the Paris Olympics are staged.

She struggled to back up from top performances in the heats. But she will have learned from that and will be a much stronger competitor for her experience in Tokyo.

And she is very unlikely to race from lane eight ever again.